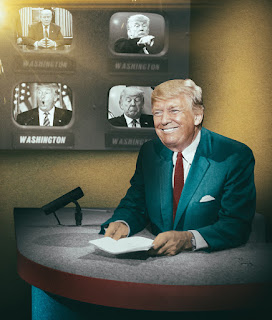 The ultra-conservative media giant is trying to convince the Federal Communications Commission (FCC) to allow it to merge with Tribune Media, giving it control over television stations that broadcast to 75% of American homes.(1)

Sinclair is already infamous for forcing its local stations to air pro-Trump propaganda segments and demanding that anchors read right-wing statements on the air. They're turning local news into Fox News, one television station at a time.

This is what the FCC and the media look like under Donald Trump -- dismantled regulations, huge mergers, and the decimation of free speech by media giants forcing its positions on the airwaves.

We can't let Sinclair take over America's airwaves and turn our television stations into Trump TV. We're calling on the FCC to reject this awful merger. Will you join us? We'll collect your signatures and comments and submit them directly to the FCC.

Sign the petition demanding the FCC reject the merging of Sinclair Broadcast Group with Tribune Media.

Sinclair has become more widely known recently for hiring Trump campaign spokesperson Boris Epshteyn and airing his taped segments on all of their stations up to nine times a week.(2)

But Sinclair has been turning local news stations into right-wing propaganda machines for more than a decade. Sinclair required all of its anchors to read messages supporting George W. Bush's Iraq War, ran infomercials lying about Barack Obama having connections to terrorism, and showed puff pieces about Trump throughout the 2016 campaign.(3)

America relies on its local news stations to keep them informed about their communities and to provide diverse viewpoints. But if Sinclair is allowed to merge with Tribune, it will become the most powerful media company in America and squeeze the life out of local news. As Representative Frank Pallone Jr. said, "I worry that our democracy is at stake because democracy depends on a diversity of voices and competition of news outlets."(4)

Fortunately, the FCC has not rubber-stamped the Sinclair-Tribune deal yet. Just recently, the FCC stopped its review to give the public more time to comment on the merger and also to ask Sinclair to provide more information on how the merger would not hurt the public good.(5)

This is our chance to let the FCC know that we don't want Trump TV in our living rooms. It’s up to us to make our voice heard and take back our media.

Help prevent local news from becoming Trump TV by demanding the FCC stop the Sinclair-Tribune merger! We'll collect your signatures and comments and submit them directly to the FCC.