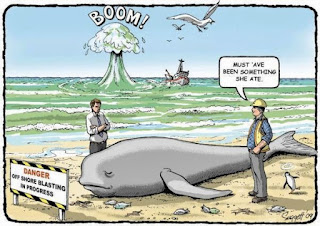 I am writing to urge you to oppose H.R. 4239, a package of bills to expedite dangerous oil and gas exploration and drilling in our oceans, risking our coastal economies, livelihoods and marine life.

The ASTRO Act is an extreme measure that would encourage expanded offshore drilling, weaken or eliminate safeguards that protect coastal communities and oceans, and provide shortsighted giveaways to the oil industry, including rolling back vital environmental and safety protections relating to drilling in the Arctic Ocean.

This bill is a blatant attempt to speed up dirty and dangerous offshore drilling in new areas and to ignore coastal community opposition.  Through fishing, recreation and tourism, healthy ocean ecosystems along the Atlantic Coast generate $95 billion in gross domestic product and support nearly 1.4 million jobs, and on the West Coast, more than $22 billion in GDP and upwards of 455,000 jobs, annually. These industries serve as economic drivers for our entire nation. Offshore oil and gas exploration and development would be in direct conflict with their long-term sustainability.

The ASTRO Act includes the provisions of H.R. 3133, which would fast-track seismic airgun blasting — an extremely loud and dangerous process used to search for oil and gas deposits deep below the ocean’s surface — and other industrial activities in the ocean that can harm whales, dolphins, manatees and other marine mammals. This provision would severely weaken long-standing protections in the Marine Mammal Protection Act (MMPA) for these iconic species. Scientists have shown that seismic airgun blasting can also harm fish, shellfish and sea turtles.

I urge you – as my voice in Congress – to oppose proposals to expand offshore drilling and fast-track seismic airgun blasting at the expense of cherished marine life. Our treasured beach destinations are valued for their clean, oil-free beaches, vibrant fishing and tourism-dependent economies. We all rely on clean water, beautiful beaches and fish that are safe to eat.

We urge you to reject this bill and its attempts to fast-track seismic airgun blasting and expand offshore drilling.

You can also cut and paste the message above to Rep. McSally's website:

Personalize it for even more impact.

Or call her office: