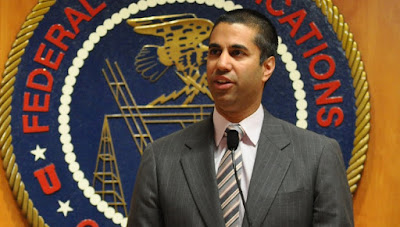 Just as we feared, Trump's Federal Communications Commission (FCC) chairman has moved to kill net neutrality – and it's even worse than we thought. His proposed rules would change the internet from an open platform for free speech and innovation to just another corporate profit center.
The FCC is expected to vote on the rules killing net neutrality on Dec. 14.We need to make sure that FCC Chairman Ajit Pai and the other FCC commissioners hear our massive opposition loud and clear before they cast their votes.
Tell FCC Chairman Ajit Pai: Don’t kill net neutrality. Click here to sign the petition.
The FCC's plan to kill net neutrality is wildly unpopular. In fact, a recent poll found that 77 percent of Americans want to keep the net neutrality rules in place.1 But so far, Pai isn't listening. That's why we are turning up the volume between now and the FCC vote with petitions, calls to Congress and in-person actions.
Under net neutrality rules, the internet is classified as a protected utility. Internet providers can’t block content, slow traffic, or create “fast lanes” to prioritize websites whose owners pay more.2 Net neutrality protects our rights to free speech, safeguards our privacy and allows innovation, organizing and economic opportunity.
But now Pai wants the FCC to completely give up its role in protecting internet users. His plan would allow internet providers to censor websites, throttle speeds and demand that sites "pay to play" – allowing large companies and wealthy insiders to control the content we see.3 This is just one more way that the Trump administration is siding with corporations over the rest of us. Now more than ever, we cannot allow corporations or their government friends to limit our freedom to organize, communicate and access information.
Tell FCC Chairman Ajit Pai to drop his plan to kill neutrality. Click the link below to sign the petition:
https://act.credoaction.com/sign/Pai-netneutrality?t=7&akid=26181%2E3130208%2ENLj-MW
- Brandy Doyle, Campaign Manager
CREDO Action from Working Assets
Add your name:
References:
Posted by Jana Segal at 1:33 PM