The system is broken! Sign the petition to remove Super Delegate Concept from voting process 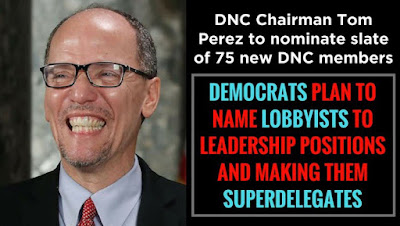 “The Democratic Party this week plans to name 75 people including lobbyists and political operatives to leadership posts that come with superdelegate votes at its next presidential convention, potentially aggravating old intra-party tensions as it struggles to confront President Trump,” Bloomberg reports.

Dark money and lobbyist served as superdelegates in the 2016 race!

Enough! This is America! Every American's vote should count!

Sigh the PETITION to be delivered to President Donald Trump and Rep. Debbie Wasserman Schultz (FL-23):

SuperDelegates are NOT under any obligation to represent Popular votes. Therefore we the people MUST GET RID of Superdelegate Concept before they can sell the election to highest bidder.

Click HERE to find the petition.
Posted by Jana Segal at 9:18 AM