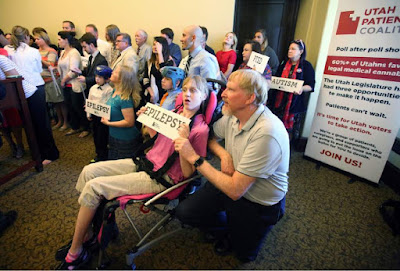 In less than a month, Jeff Sessions’ Justice Department could have free reign to wreak havoc in medical marijuana states – unless we take a stand.

Tell your U.S. Representative to renew the Rohrabacher-Blumenauer Amendment and protect medical marijuana from federal attacks.

Every year since 2014, advocates like you helped pass a spending amendment blocking the Justice Department from interfering in medical marijuana states. We passed it in the Senate Appropriations Committee again this year – but unless the amendment is included in the final appropriations bill it will expire on December 8th.

Sessions recently sent a letter to Congress demanding that members not renew it.

The Rohrabacher-Blumenauer Amendment bans the Department of Justice from using money to interfere in the 46 states that have passed some form of medical marijuana law. It means patients and their caregivers will not have to live in fear of arrest and prosecution for simply using a medicine that is legal in their state.

But with Sessions escalating the war on drugs and the December 8 expiration approaching, it’s absolutely critical to ensure Congress continues to protect medical marijuana in states that have legalized it.

Your Representative will decide the fate of this crucial amendment. Contact your Member of Congress to help protect medical marijuana from the threat of federal harassment and prosecution.

Time is running out to convince Congress to preserve these protections.

Please stand with us to safeguard our victories and protect patients who are simply using a medicine that relieves their suffering.
- Grant Smith, Drug Policy Alliance
Posted by Jana Segal at 7:54 AM