The U.S. Senate is set to vote — this week — on a dangerous tax bill that opens up the Arctic Refuge to drilling 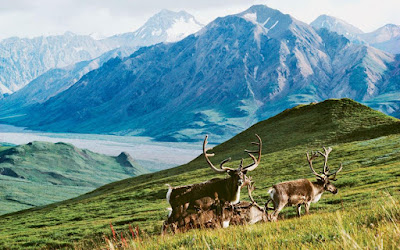 It's crunch time in our fight to save the magnificent Arctic National Wildlife Refuge from oil companies and their fossil fuel backers in Congress.

The U.S. Senate is set to vote — this week — on a dangerous tax bill that opens up the Arctic Refuge to drilling while giving a massive tax break to corporate polluters and the super-rich.

Oil companies have been chomping at the bit for decades to get access to the oil under the Arctic Refuge, and some pro-polluter members of Congress — with full backing of President Trump — are working overtime to give it to them ... unless we can put a stop to it.

Before the Senate votes this week, the NRDC Action Fund and our friends across the environmental movement are targeting a handful of senators whom we might be able to sway to vote NO on this terrible tax bill. These include Sens. Susan Collins (Maine), John McCain (Arizona), Joe Manchin (West Virginia), Bob Corker (Tennessee), Lindsey Graham (South Carolina), Rob Portman (Ohio), Cory Gardner (Colorado), and Dean Heller (Nevada).

That's where Arizona residents like you come in. Please call Senator John McCain today (and again tomorrow) in his Capitol office at (202) 224-2235 and ask him to oppose this egregious tax bill.

Tell the senator's staff person your name and where you live.


Then tell them that you urge the senator to vote NO on any tax bill that tries to pay for corporate tax breaks by opening the pristine Arctic National Wildlife Refuge to oil drilling.

Why the Arctic Refuge Must be Protected:


Turning the Arctic Refuge over to oil companies would jeopardize our nation's largest denning site for pregnant polar bears ... the last home of 350 shaggy muskoxen ... the birthing ground for the 197,000-member Porcupine caribou herd ... and the culture and survival of the region's Gwich'in people.

The refuge is one of the last unspoiled ecosystems on earth — and it's too important to sell off to oil giants so Congress can pay for tax cuts for the people and polluting companies that need them the least.

The House of Representatives already passed its own version of this terrible tax bill (the House version also eliminates the electric vehicle tax credit and undermines support for wind and solar power). If we fail to stop the Senate's tax bill, a compromise will need to be hammered out between the two versions. We'll be in touch with you again in the critical days ahead with next steps in our fight.

We have been fighting to keep the oil companies at bay in Alaska's Arctic Refuge for decades. We can't give up now.

So, please call Senator John McCain at (202) 224-2235 and urge him to vote NO on a tax bill that opens the Arctic Refuge to oil drilling.

You can also leave a message on Sen. McCain's website HERE.
Posted by Jana Segal at 12:47 PM