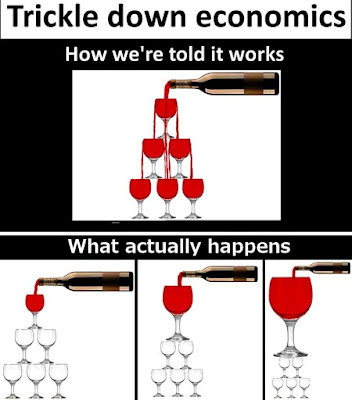 House Republicans have unveiled their tax plan, and you shouldn’t believe the hype. They’ll tell you that high-income households won’t receive tax breaks. And that their tax plan will result in higher wages for working people. Both are false. Thanks to another loophole they’ve added for so-called “pass-through” income, top 1 percent households will receive a massive tax cut. They call this a tax cut for small businesses. That’s also false. According to a recent Treasury Department report, 70 percent of “pass-through” income is claimed by the top 1 percent. They’ll also claim that lower corporate tax rates will trickle-down to working people. But, across U.S. states, reductions in corporate tax rates are not associated with faster median wage growth. They result in a higher share of income going to the top 1 percent.Stand with the EPI Policy Center and our partners in rejecting Donald Trump and Republican leaders’ tax plan that benefits corporations and the top 1 percent at the expense of working families. Write to your members of Congress today! A big tax cut for the rich is just one half of the plan set out in the budget resolution approved by Republicans last month. The other half includes huge cuts to Medicare, Medicaid and other valuable programs that help the most vulnerable. Instead of tax breaks for hedge funds and private equity firms that are paid for with cuts to Medicare and Medicaid, we need a tax plan that invests in our country’s future.Write to your members of Congress today and tell them to reject Donald Trump and Republican leaders’ tax plan that cuts taxes for the top 1 percent. We should be crystal clear on this point: Claims that cutting taxes for rich businesses will trickle-down to boost the wages of typical Americans are baseless. This is a tax cut that starts with the rich and will stick with the rich. America is a rich country that can do much better for working families, but only if the “tax cuts for the rich, first and always” zealotry of today’s Republicans is rejected by the American people and defeated in the halls of Congress. - Josh Bivens, Economic Policy Institute