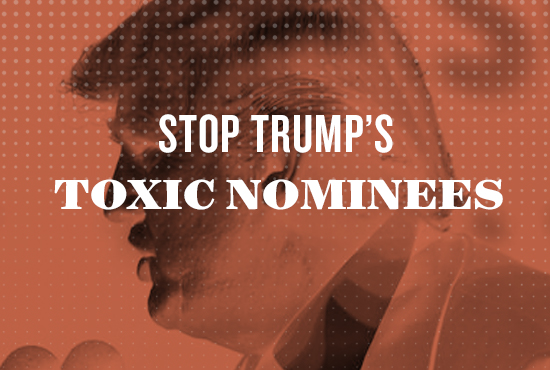 Trump wants to install four big polluter allies in key positions at the EPA and the White House — and the Senate could move forward with these toxic nominees at any time. Tell your senators to say NO!

What do they all have in common?

They could all soon hold key environmental positions at the EPA and the White House.

How can anyone entrust protection of our environment or health to these individuals who've spent their careers working for big polluters?

But before these anti-environment nominees can take office, they have to get past the Senate.


Tell your senators — John McCain and Jeff Flake — to reject all of President Trump's pro-polluter nominees for key positions charged with defending our environment.

Trump's EPA chief, Scott Pruitt, has already been hard at work eviscerating the common-sense safeguards that protect our clean water and air, and stalling our progress in fighting climate change. Now, these new nominees have the potential to wreak even more havoc on our environment and public health:

Andrew Wheeler, nominated to be Pruitt's EPA deputy, has spent the past eight years as a lobbyist for the coal industry and other industrial polluters, fighting against efforts to limit dangerous carbon pollution. Tell your senators: Vote NO.


Michael Dourson, Trump's pick to oversee chemical safety and pollution prevention at the EPA, has spent decades as a consultant doing the bidding of chemical and tobacco companies. He's built a career out of making it easier for companies to expose people to unsafe levels of toxic chemicals linked to cancer — and even fought to allow them in municipal drinking water supplies. Stop Trump's toxic nominees.

Bill Wehrum served as acting head of the EPA's clean air office under President George W. Bush. Courts found that, under his leadership, his office violated the Clean Air Act over 30 times, and increased dangerous air pollution. But Trump has nominated him to take control of the office again. Tell your senators to stand up for clean air and water.

Kathleen Hartnett White, Trump's nominee to serve as chair of the White House Council on Environmental Quality is a career fossil fuel apologist and oil industry shill. Not only does she deny the threat of climate change, she has dismissed the promise of renewable energy as "diffuse, unreliable, and parasitic" — in total opposition to all science and evidence. Don't let these anti-environment extremists set environmental policy.

The protection of our environment and health is not a game for hucksters and fools.It's one of the most serious responsibilities of government. And it can't be left to Trump and his climate denying, pro-polluter allies.

The Senate could move forward with these nominees at any time, so we must act now: Tell your senators to vote NO on all four of these toxic nominees, and to pressure their colleagues to do the same.