ACTION ALERT: Tell ExxonMobil and Chevron: It's Time to Act on Climate 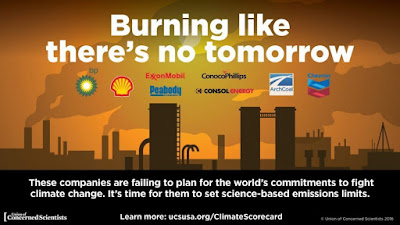 At a recent Union of Concerned Scientists event in Houston, Climate Change and Climate Risk investment risk expert Robert Litterman told the crowd that "it is time to slam on the brakes, and that's not going to be good for the fossil fuel companies."

It's a critical message and the shareholder community is listening: just days later, ExxonMobil shareholders approved a climate resolution by an unprecedented 62.3 percent! This is the highest vote for any climate-related measure at the world's largest publicly traded oil company. UCS supporters helped win this major victory at ExxonMobil's annual meeting last week by demanding action from cities, states, the nation, and corporations.

Growing numbers of Chevron shareholders also supported resolutions demanding better disclosure of climate risks, business strategies, and corporate lobbying. In the face of the national and global call for climate action, investors want more information about what the low-carbon transition means for the future of major fossil fuel companies!

The fossil fuel industry has tried to outmaneuver climate activists, but we've gained incredible ground. Even as President Trump seeks to pull the United States out of the Paris Climate Agreement, we are showing these companies that climate action must remain a priority. These companies have nowhere to hide. Now, they must act.

Tell ExxonMobil and Chevron: business as usual is not a climate action plan. It's time to act!

Shareholders and the public have made it abundantly clear that reliance on fossil fuels cannot be the way forward. The votes last week represent a groundbreaking shift in the public conversation, and the fossil fuel industry needs to respond.

While these companies claim to be addressing climate risks, they also fund groups such as the American Legislative Exchange Council, which spreads climate disinformation and lobbies against climate action including US participation in the Paris Climate Agreement. And just days after ExxonMobil's annual meeting, New York Attorney General Eric Schneiderman stepped up his investigation into whether the company misled investors and the public about the climate risks of its product.

We must hold major fossil fuel companies and their surrogates accountable.

It's time for ExxonMobil and Chevron to respond to the concerns spelled out in the climate resolutions that garnered major support among their own shareholders. It's time for them to lay out a clean and honest plan to join the global effort on climate change.