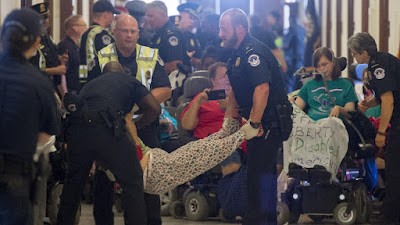 Senate Republicans just released their health care repeal bill, and it’s just like the original: insurance companies and the ultra-rich get a huge tax break while working families get screwed over.

This is an all hands on deck moment. Senate Majority Leader Mitch McConnell is trying to pass this mean-spirited, heartless bill by July 4. In order to defeat it, every Republican lawmaker, starting in the Senate, will need to meet massive resistance every single day. Will you call your senators and let them know that this bill is unacceptable to their constituents, and that no minor tweaks will make it better?

Call your senators and demand that they reject the Republican health care repeal.

“The Senate bill, unveiled today, is not a health care bill. It’s a massive transfer of wealth from middle-class and poor families to the richest people in America. It hands enormous tax cuts to the rich and to the drug and insurance industries, paid for by cutting health care for everybody else. Those with private insurance will experience higher premiums and higher deductibles, with lower tax credits to help working families cover the costs, even as their plans might no longer cover pregnancy, mental health care, or expensive prescriptions. Discrimination based on pre-existing conditions could become the norm again. Millions of families will lose coverage entirely.”(1)

Mitch McConnell says that his bill won’t allow people with pre-existing conditions to be denied coverage. But under the GOP proposal, states can eliminate the requirement that health insurance plans include certain key benefits. That means health insurance companies couldn’t deny coverage to cancer patients, but it could sell them a plan that doesn’t cover their treatment. That’s just immoral.(2)

The Senate Republican bill is full of cynical trickery like this. Another example: the bill subsidizes health insurance payments for poorer Americans for seven years -- just long enough to make sure that no Republican who votes for this will have to face a tough reelection campaign until years after the subsidies disappear. After that, poorer people will be left to fend for themselves.(3)

Of course, the most reactionary Republicans are opposed to any extension of subsidies. So McConnell tried to woo them by cutting Medicaid even more deeply than the House bill does. The elderly, the poor, the disabled, and children will all see cuts to essential benefits that give them a shot at a decent life on a level playing field.(4)


The health care repeal will move quickly -- and that’s why we need you to speak up now. McConnell wants this to be voted on by July 4, but if more than two Republican senators oppose the bill it won't be viable. Republican senators like Dean Heller of Nevada, Lisa Murkowski of Alaska, Jeff Flake of Arizona and Susan Collins of Maine have all expressed misgivings about the bill, and are important targets.(5) At the same time, reactionary Republican senators like Rand Paul, Ted Cruz, Mike Lee, and Ron Johnson are opposing the bill because they don’t think it goes far enough to guarantee misery for millions of people. There’s a real path to stopping this cruel bill from becoming law.(6)

If the repeal bill does pass the Senate, House Republicans will move quickly to try to pass the Senate bill -- giving us another opportunity to stop the health care repeal from becoming law.

In order to stop this bill, we’ll need to demonstrate massive public opposition every step along the way, every single day. Will you call your senators today and ask your friends and family to do the same?

Your senators need to hear from you today, no matter how you do it. If you can’t make a phone call, try using a text message to send them a fax using Resistbot.

Video of Protesters with disabilities forcibly removed
Posted by Jana Segal at 1:57 PM