Kick off the Summer of Resistance on Sunday June 25 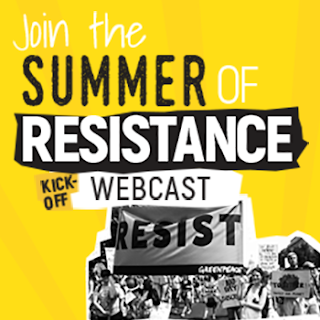 "You never forget the feeling of taking part in non-violent direct action. For me, it’s a combination of anticipation and adrenaline. It’s the empowerment and the love that come from taking big risks for something I know to be right — like peacefully blocking an oil rig from setting sail to drill in the Arctic — that compel me to put my body on the line," wrote Rachel Rye Butler

Bold acts like these bring our communities together. They remind us of our shared responsibility to one another. And they continue to prove how much power we the people truly hold if we’re willing to use it.

This is what gives me hope that the resistance movement can defeat Trump’s attacks on our climate and democracy.

We need courageous, creative acts of peaceful resistance more than ever if we’re going to stand up to Trump’s dangerous agenda. Join us as we launch the Summer of Resistance with a huge creative resistance training webcast on Sunday June 25. RSVP today!

The Summer of Resistance is one of the most ambitious projects I’ve ever seen Greenpeace take on. We’re training thousands of people in non-violent direct action and inspiring more than 100 acts of creative resistance across the country to fight for a green, peaceful, and just future.

At a time when the Trump administration is working on all fronts to advance its hateful agenda, the Greenpeace community is coming together to learn the skills of creative communication, peaceful protest, and non-violent direct action necessary to step up our resistance.

AND we’re putting those skills to work in our communities in big way.

It all starts on Sunday June 25 at 1pm PDT / 4pm EDT. Can I count on you to join us? RSVP today to power a wave of creative action to protect our climate and communities from Trump’s agenda.

Just two weeks ago, many of us were angered and saddened by Trump’s decision to pull the United States out of the Paris Climate Agreement, setting back global climate progress and leaving the world’s most vulnerable communities to pay the price.

These kinds of assaults on our climate and our human rights are unacceptable — and that’s what the Summer of Resistance is all about. If Trump and his administration of climate-deniers and racists think they can push through their agenda against the will of the American people, it is up to us to show them they are wrong. We will RESIST!

We’ve got an ambitious plan to do just that, and your involvement is critical. Join us on Sunday June 25 to kick off the Summer of Resistance and take YOUR resistance to the next level.

Email ThisBlogThis!Share to TwitterShare to FacebookShare to Pinterest
Labels: Summer of Resistance webcast