TAKE ACTION: Stop the largest open-pit mine in N. American from being built in the Bristol Bay watershed. 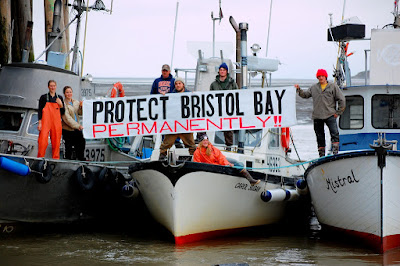 Alaska’s Bristol Bay is home to some of the most abundant salmon populations found anywhere in the world, a $1 billion fishing industry, and Native communities that have thrived on this resource for millennia. However, all this could be destroyed.

The Trump administration has just cut a deal with the corporation that would build the massive Pebble Mine in the Bristol Bay watershed, and we need your help to fight back.

In the mountains, streams and wetlands surrounding this spectacular bay, developers have proposed the largest open-pit mine ever built in North America—a mine pit that could be nearly as deep as the Grand Canyon. Over its lifetime, this copper and gold mine could generate 23 billion tons of dangerous waste, wiping out over 90 miles of salmon streams and more than 5,000 acres of intertwined wetlands, ponds and lakes—the very heart of this rich salmon ecosystem. 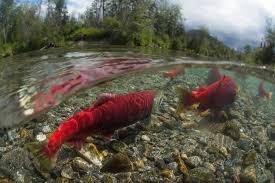 In 2010, alarmed local Native tribes petitioned the Environmental Protection Agency to prevent destruction of these vital waters. The EPA responded with a rigorous, peer-reviewed scientific study concluding that the proposed mine would have unacceptable adverse effects on the rich salmon fishery. After completing this study, the EPA in 2014 proposed new restrictions needed to protect the habitat, and with the help of people like you, the public response was overwhelmingly supportive.

But the Pebble Limited Partnership, which owns the mining rights, waged a protracted legal battle that prevented the EPA from taking final action before the new administration took office. And then…along came the Trump administration, which quickly settled that lawsuit with the mining company!

Yep. The Scott Pruitt-led EPA has now promised to start the process of withdrawing the proposed protections…and that’s where you come in! We need you to say no.

This backroom deal ignores years of rigorous scientific study and overwhelming community opposition to a mine that would devastate the local fishing economy, culture and way of life.

But we can still beat this mine. The EPA needs to hear loud and clear from voices across the country that science matters, that communities must be protected, and that the Pebble Mine is not acceptable.

I write in support of the communities of Alaska's Bristol Bay and ask you not to withdraw the proposed determination to adopt restrictions protecting the habitat of Bristol Bay's world-renowned salmon.

The proposed determination was made at the request of local communities and adopted only after years of rigorous scientific study, public participation and peer review. The EPA was correct in 2014 when it found that the Pebble Mine would have "significant and unacceptable adverse effects" on "one of the most productive, pristine, valuable and vulnerable ecosystems remaining in North America today."

The EPA has noted that commercial fishing in Bristol Bay generates $300 million annually in direct sales of commercially caught salmon, generating 11,000 jobs. These salmon support not only the commercial and sportfishing industries, but a traditional Native way of life that has endured for millennia and thrives today.

The EPA should stand by its proposed determination and take all necessary actions to protect the Bristol Bay watershed.
Posted by Jana Segal at 10:01 AM