Let’s use Facebook and Twitter to brand jam PepsiCo and call for it to end palm oil production that’s spreading real heatwaves -- and droughts, and melting ice caps 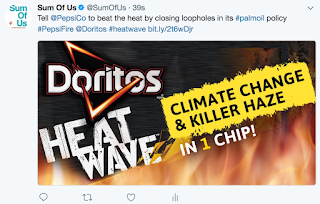 This summer will be hot -- and despite PepsiCo rolling out a new “Heatwave” Doritos flavor, it’s not just the chips.

The PepsiCo PR team should have thought twice about naming its spicy summer Doritos flavor “Heatwave.” The “hot” new flavor is a reminder of the loopholes in PepsiCo’s palm oil policies that have its suppliers literally setting fires to Indonesian rainforest.

2016 was the hottest year on record, and with companies like PepsiCo linked to reckless palm oil production that clears rainforests and endangers orangutans, 2017 is shaping up to be no different. As PepsiCo’s conflict palm oil heats up the planet, it’s time for us to turn up the heat on Pepsi. Heatwave Doritos give us a great chance to embarrass PepsiCo in front of its customers.

Let’s use Facebook and Twitter to brand jam PepsiCo and call for it to end palm oil production that’s spreading real heatwaves -- and droughts, melting ice caps, and worse -- across the world.
Follow the steps below to make your voices heard:
Step 1:

Go to Dorito's Facebook wall.
Step 2: Copy and paste the following message or write your own words as a comment on one of Doritos' top Facebook posts:
Doritos’ parent company PepsiCo is heating up this summer with a cinnamon-spiked new drink called Pepsi Fire and Doritos Heatwave chips. But we’re more concerned with the fire that Pepsi’s NOT advertising: the slash-and-burn techniques of suppliers in its #palmoil supply chain. #DoritosHeatwave #PepsiFire #deforestation  https://actions.sumofus.org/a/pepsi-fire-palm-oil/?source=fb

If you use Twitter, tweet directly at PepsiCo by clicking the image below:
Posted by Jana Segal at 2:09 PM

Email ThisBlogThis!Share to TwitterShare to FacebookShare to Pinterest
Labels: Pepsi cuts down rainforests for palm oil