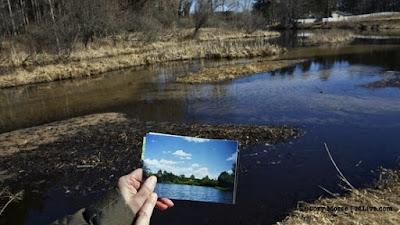 Our names are Yousef Emara and Nathan Koh. We are eighth graders in Ann Arbor, Michigan.  Our class completes a Sustainability Action Project (SAP) by choosing a cause in which we can make a positive impact.  We have chosen to raise awareness of Nestle’s water pumping practices in Michigan and petition the state legislature and the Michigan Department of Environmental Quality (MDEQ) to reject an increase in Nestle’s pumping rates in White Pine Springs, Osceola County, Michigan.
Why This Issue Matters
In many countries, including the United States, there is little limitation on the rate at which water can be pumped out of aquifers (underground water reserves).  Water bottling companies have been pumping billions of gallons of water out of aquifers and impacting the watershed and surrounding environment and selling water bottles for 3000 to 5000 times more than they pay for it.  One such pumping site is Nestle’s well field in White Pine Springs, Osceola County, Michigan, which is part of the Muskegon River watershed.
What This Means for Michigan
Nestle runs a plant for its two water bottle brands, Ice Mountain and Pure Life, in Stanwood, Michigan.  The company operates three well fields with a total of seven wells, all within the Muskegon River watershed.  According to the Michigan Department of Environmental Quality (MDEQ), Nestle pumped more than 3.4 billion gallons of water from its three Michigan well fields between 2005 and 2015.  In 2015, Nestle was given approval by the MDEQ to pump 250 gallons per minute at White Pine Springs Well in Osceola County.  The company now wants to increase the amount of water it pumps from this well to 400 gallons per minute. Nestle would pay the state of Michigan $200 per year for this increase.
According to a test conducted in August 2000 by Malcolm Pirnie Inc., Nestle’s White Pine Springs Well pumps water from an underground aquifer that is connected to the aboveground water system through a permeable layer of Earth, called a leaky aquitard.  Pumping water from the aquifer can drain significant amounts of water from above. This indicates that the wetlands and wildlife above the ground are at high risk of being harmed by Nestle’s pumping.  Residents, like Rhonda Huff, as reported by the MLive newspaper on April 9, 2017, noticed that water levels in Osceola County’s Chippewa Creek, which flows into the Muskegon River watershed, have significantly dropped in recent years, affecting trout populations.
Nestle needs a permit from the MDEQ in order to increase the rate at which it pumps water.  The MDEQ requires the use of a Water Withdrawal Assessment Tool to determine the impact of proposed water withdrawals on fish and wildlife in the area.  Nestle’s proposed water withdrawal increase to 400 gallons per minute failed to pass MDEQ’s Water Withdrawal Assessment Tool. However, the MDEQ can and did overrule the failing grade determined by the Water Withdrawal Assessment Tool.
Nestle’s plan to increase the amount of water withdrawn to 400 gallons per minute would undo an agreement with environmentalists reached more than seven years ago for a well field in Sanctuary Springs, which is also part of the Muskegon River watershed.  In 2001, Michigan Citizens for Water Conservation sued Nestle over potential damage to the system of lakes, rivers, and streams that its water withdrawal would cause.  An agreement was reached in 2009, limiting the amount of water the company could pump.
What You Can Do To Help
Please sign our petition!  Help us in reaching our goal of 10,000 signatures to present to the state legislature and the MDEQ. Thank you for taking the time to protect our most precious resource – water.
- Yousef Emara and Nathan Koh.