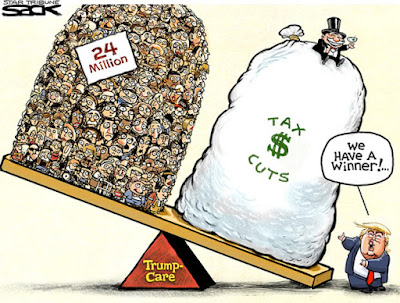 Mitch McConnell is scrambling to adjust the disastrous Senate version of Trumpcare and pick up more support, after the CBO scoring of the bill predicted 22 million Americans would lose their healthcare under the bill. Polls show that, at best, fewer than 20% of Americans support the Republicans’ efforts to “repeal and replace” the Affordable Care Act, but it remains a high priority for the most committed members of their far-right base and, more importantly, for the Koch brothers and their other ultrawealthy donors who would reap a MASSIVE tax cut from the bill.

That’s all stuff you might already know… but in just the last couple of days, as more analysis of the legislation has continued to come out, we can see just how sneaky and insidious McConnell’s bill is … no wonder he thought developing the bill in extreme secrecy and ramming it through with reckless disregard for debate and process as perhaps his only chance of getting it passed.

We knew that the bill “back-loaded” many of the cuts, so that many wouldn’t take effect until 2021 and others not until later than that. But a new report yesterday by the CBO points out that the cuts to Medicaid would be even deeper and more devastating down the road due to future funding being tied to the consumer price index, which has a lower growth rate than inflation of medical costs. So not only are there deep cuts, but the money that still would be provided for low-income, disabled, and some elderly Americans would shrink in real terms and not go far enough to cover their care.

- Ben Betz, People for the American Way
Posted by Jana Segal at 12:30 PM