Tomorrow the Supreme Court lifts the stay on the Muslim ban until it hears the case. How can we fight back? 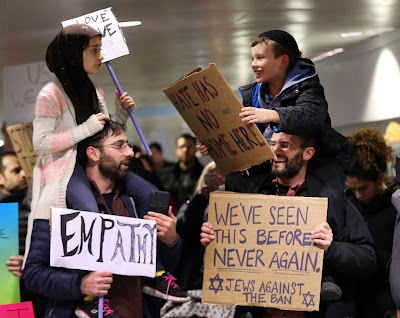 You probably saw our message on Monday when we learned that the Supreme Court of the United States decided not only to hear the Muslim ban case but also to partially lift the stay in the mean time. This is devastating news and means that the Muslim and refugee ban will partially go into effect tomorrow. We saw what happened the last time this happened – discrimination and entire communities living in fear—and we can’t let that happen again.

Amnesty International has fought the Muslim and refugee ban since the beginning when President Trump originally instated it, and we will keep up the fight until it is stopped. This ban is nothing more than an assault on human rights based on fear, hatred, and bigotry.

Will you join the fight? We need Amnesty activists like you to stand up and fight back.Join one of our urgent mobilization calls tomorrow.

Tomorrow at 12pm EST and again at 7pm EST, we will be hosting calls to learn more about this human rights crisis and what you can do to fight back. You’ll join Amnesty activists from across the country as well as senior Amnesty staff members as we plan our next steps to fight the Muslim and refugee ban. We can’t do this alone and need your help. Will you join us?

President Trump has signed an order banning people from 7 Muslim-majority countries and shut down the refugee program. We must denounce this hateful order.

We need every senator to act. That’s why we are calling on Amnesty activists like you to send a loud and clear message to your senators. No Ban, No Wall — Not in my name.

I urge you to immediately denounce Trump's travel ban. Trump’s order is based on fear-mongering, bigotry and xenophobia that I reject. Support efforts to protect the human rights of people in our community and around the world, including the rights to freedom of religion and non-discrimination.