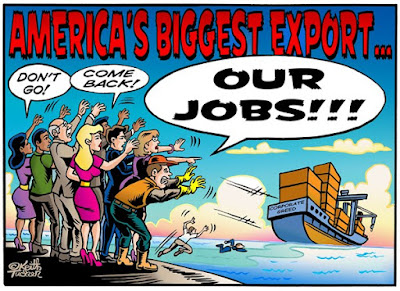 Donald Trump has formally announced his intention to renegotiate the North American Free Trade Agreement (NAFTA) with Mexico and Canada.

NAFTA has been a disaster for the American worker — and so has Trump. Reworking this trade deal under the current administration is likely to make things even worse.

Don't let the Trump administration give corporations even more favors in NAFTA 2.0!

There's a lot that's wrong with NAFTA, from the outsourcing of hundreds of thousands of jobs to giving foreign corporations the power to challenge our country's laws and regulations. As a result, corporations have forced through things like the overturning of country-of-origin food labeling and sued for damages after the Keystone XL pipeline was initially rejected.

If our government actually pushed for new terms of the agreement that prioritized people and the environment over corporate profits, that would be one thing. But if left to their own devices, Trump administration negotiators will continue favoring Wall Street investors at a steep cost to the rest of us. Demand that any renegotiation of NAFTA puts people first!

Trump has ongoing conflicts of interest — including businesses in Canada and Mexico. And we've seen Trump's leaked draft plan for NAFTA negotiations. It reads like a corporate wish list and includes incentives for offshoring jobs, continued use of corporate tribunals for challenging domestic laws, rollbacks on food safety policies, and more.

Now that NAFTA renegotiations are really happening, it's time we made some demands of our own, including:

We need to shine a very bright light on this proposed renegotiation process, just like Food & Water Watch helped to do to stop the Trans-Pacific Partnership (TPP) last year.

All too often, these trade agreements are negotiated behind closed doors by corporate advisers, with no input from the rest of us. And we've seen how that works out: lost jobs, depressed wages, undermined health and labor standards. We need trade agreements that actually benefit working people, not just Wall Street's bottom line.