Take Action: Defend our right to a free press 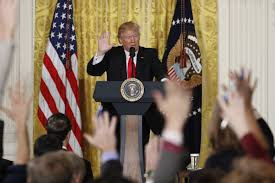 President Donald Trump’s disdain for the media and its information could shape attitudes across the country—how electorates evaluate claims during campaign cycles, how students are taught in school to ferret out facts, and how political and corporate officials deal with the media and the public.

Just this past month, a number of incidents threatening journalists’ rights occurred:
The watchdog role of the media, an informed citizenry, and the vigilance of public discourse in exposing lies and wrongdoing have separated the United States from kleptocracies, oligarchies, and cronyist regimes all over the world. Those precepts may now be in jeopardy.

Sign the petition to elected officials in Washington and across the country to uphold and defend our constitutional right to a free press.
To: All Members of Congress and Elected Officials Across the Country

Freedom of the press is a central pillar of our democracy. The president’s disregard for the role of the press and the public’s right to information threatens to reshape society writ large. We demand that you uphold and defend our constitutional right to a free press.
Posted by Jana Segal at 8:57 AM