Confronting Rep. McSally on her position on Dodd-Frank 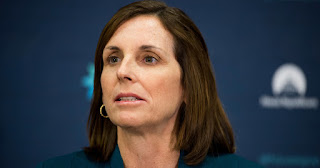 "Our "pop-up" rally last week was very successful, and although most of us were turned away from attending the meeting with Martha McSally, one was able to get in and record her speech.

Most of us have been calling, tweeting, sitting in on meetings and writing to her and her staff in order to get answers to our questions about her positions. We have also heard the refrain, over and over again: she doesn't have an opinion on that at this time, I haven't talked to her about that, etc. But in that meeting with out-of-district bankers/donors, she was very free with opinions and reasons for her votes.

When we meet with Julie Katsel, staffer to Sen. Flake, we are informed of the Senator's positions, even if she knows we won't like them. She talks about the trust between constituent and Representative. What McSally has done is destroy this trust. How can we ever believe her when she says she doesn't have an opinion, or when the staffers have no answer? How can we look her people in the eye when she is on tape mocking us in a room full of donors?

Tomorrow morning we will be saying NO to HR10, the CHOICE Act. This bill aims to roll back consumer protections that Dodd-Frank gave us following the Great Recession. Now, maybe Dodd-Frank needs some tweaks, but her gleeful scorched earth approach is NOT the answer.

Audio of her Dodd-Frank repeal

We will be playing the FULL audio from her meeting with the bankers right on her doorstep tomorrow morning from 8AM-9AM, Friday June 9th at 4400 E. Broadway Blvd.

We are saying NO to HR10 and asking for some REAL transparency. We are asking her to answer to her CONSTITUENTS and NOT out-of-district bankers."

We'll be at Congresswoman McSally's Tucson protesting HR 10, the CHOICE Act, which rolls back many of the protections that Dodd-Frank gave Americans after the housing bubble popped. We will also be releasing audio of a "secret" meeting McSally had with bankers, playing it on a speaker in front of her office. Come and join us!

Other indivisibleaz Events:
-Monday, June 12th 7P General Meeting
-Wednesday, June 14th 6P-7:30P, Murphy-Wilmot Library Civics 101- A Refresher for All of Us
-End on June Book Club discussion at Bentley's
Posted by Jana Segal at 11:36 AM