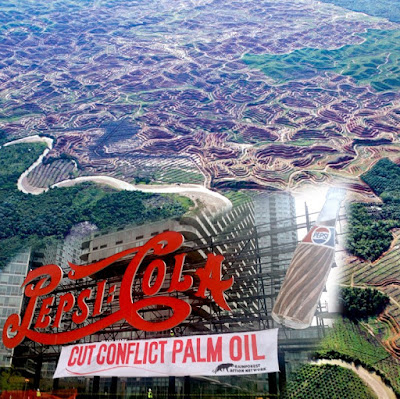 Pepsi is heating up this summer with a cinnamon-spiked new drink called Pepsi Fire. But we’re more concerned with the fire that Pepsi’s NOT advertising: the slash-and-burn techniques of suppliers in its palm oil supply chain.

In 2014, PepsiCo updated its palm oil policy under pressure from our SumOfUs community and our partners. But thanks to a new Rainforest Action Network (RAN) report, we know that a major Pepsico partner, Indofood, continues to produce conflict palm oil made with child labor and rainforest destruction.

If Pepsi wants to talk about heat, let’s talk about rising global temperatures -- temperatures that need to stay well below a 2 degrees Celsius increase to stop irreversible climate change. We can’t win the fight against climate change when companies like Pepsi undermine their own sustainability promises. That’s why we’re turn up the heat on Pepsi this summer to live up to its palm oil promise and put out the Pepsi Fires raging across Indonesia.
Call on Pepsi to beat the heat this summer by ensuring Indofood live up to its sustainable palm oil policies.

RAN’s report showed that as recently as November 2016, PepsiCo’s suppliers were still linked to rainforest destruction in the Leuser Ecosystem -- the “orangutan capital of the world.” What’s more, PepsiCo continues to make all PepsiCo branded products in Indonesia with Indofood - a company with documented child labor, worker exploitation, and land rights abuses.

We can’t look the other way while PepsiCo talks a big sustainability game, then cuts corners at every turn. We owe it to all those impacted by reckless palm oil production -- from local community farmers to endangered orangutans -- to stand up to Pepsi’s broken promises. It’s time for Pepsi to break the silence on the real fires it’s setting, and stop being complicit in the reckless production of palm oil that hurts people and the planet.

Last month, we confronted PepsiCo's CEO Indra Nooyi at the companies' annual shareholder meeting in North Carolina. Today, we're using PepsiCo's poor marketing to remind them that as long as it keeps allowing Indofood to produce palm oil linked to child labor, worker exploitation, and deforestation, we’ll keep bringing the fight to their doorstep
Tell Pepsi to put out the real Pepsi Fires by holding Indofood to its Pepsi's sustainable palm oil policy.