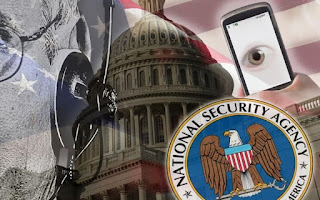 Senate Republican hardliners introduced a bill to permanently reauthorize Section 702, and the White House endorsed it.1

Here's the backgrounder: Section 702 of the FISA Amendments Act authorizes intelligence agencies (like the NSA and the FBI) to scan in bulk phone calls, text messages and emails traveling across the internet. They're supposed to only target people outside of the United States, but we know they also sweep up massive amounts of Americans’ communications — and that they specifically search through that collected information for Americans.2
Trump himself is in the midst of an FBI investigation over his ties to Russia, and now he wants blanket authority to continue the internet surveillance that Edward Snowden exposed under Section 702. Luckily, it's not Trump who decides — its Congress.
Even though the cyber spying programs under Section 702 are intended to snoop on foreign targets, anyone who's ever typed a search in Google knows that you get a lot of results you didn't ask for.
In the case of Section 702, those unwanted results are "family photographs, love letters, personal financial matters, discussions of physical and mental health, and political and religious exchanges"3 between Americans.
Permanent reauthorization of Section 702 comes at a high cost: our Fourth Amendment and our Constitutionally protected civil liberties.
Sources:
- DEMAND PROGRESS
Posted by Jana Segal at 9:29 AM