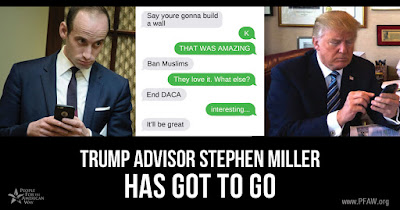 The number of Trump's group of visible white nationalist advisers has been whittled down with the departures of Steve Bannon and Seb Gorka from the White House. But one notable anti-immigrant ideologue, the architect of Trump's anti-Muslim ban, Stephen Miller, remains. His departure from the White House is long overdue, and your help is needed.
Act now: Stephen Miller must be FIRED>>
Stephen Miller is exactly what you would expect from a Trump adviser -- former classmates and friends have described him as openly racist and hostile towards non-white people. He was a longtime aide for Attorney General Jeff Sessions who has made a career attacking the rights of people of color and who just enthusiastically announced the end of the Obama-era DACA program. And when he worked for Sessions he was integral to the effort that blocked action on the DREAM Act in Congress.
So what else do we know about Stephen Miller?
The consequences of Miller's beliefs are clear -- he has made arguments attacking Islam since he was in high school and he wrote the Trump campaign's immigration platform which included ending DACA. Since Trump's campaign launch, he has levied one attack after another against immigrants. He encouraged Trump to enact an unconstitutional travel ban on Muslims, and to direct his team to end DACA and upend the lives of 800,000 young people.
The end of Bannon and Gorka's time in the Trump administration is a good sign, but we can't ignore the fact that there are still white nationalists in the White House. As a prominent advisor to Trump, Miller's apparent white nationalist ideology is central to the policies of this administration.
But public outcry against white nationalist ideas and beliefs is critical -- which is why your voice and opposition to Miller in a position of extreme power can make a difference.
Add your name and demand Trump fire his advisor Stephen Miller>>

- People for the American Way