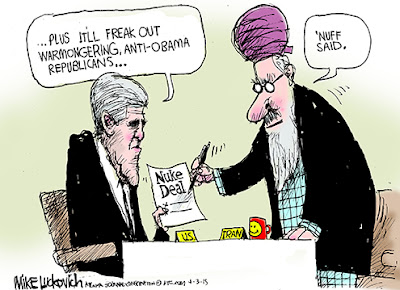 During his campaign, Donald Trump cavalierly promised to “rip up” the Iran nuclear deal1 – effectively pledging to send the country into yet another war of choice in the Middle East. Now Democrats are helping him.

Recently, congressional Democrats overwhelmingly voted to impose new sanctions on Iran,2 which Iranian officials are now saying is a direct attempt to undermine the Iran nuclear peace deal.3 There is no justifiable reason for these new sanctions on Iran – experts agree that the Iran deal is working.4 Without the deal, Iran might at this moment be only weeks away from being able to produce a massive bomb, but instead it has spent the past two years actively dismantling its nuclear program.5 As our friends in the Congressional Progressive Caucus made clear in a statement: “The Iran deal must be upheld because the alternative is war.”6

Democrats in Congress need to hear the message loud and clear: We will not stand for them collaborating with the Trump administration or congressional Republicans in any attempts to sabotage or undermine efforts to secure peace. The stakes are too high.

Tell congressional Democrats: Block and resist any attempt by the Trump administration to undermine the Iran nuclear peace deal. Click here to sign the petition.

These sanctions come after Trump certified twice that Iran has been keeping up its end of the bargain in the nuclear deal.7 And in a development that is reminiscent of the cooked up false intelligence the Bush-Cheney regime leveraged to drive us into a massive, deadly and endless war in Iraq, former U.S. intelligence officials have recently reported feeling pressured by the Trump White House to declare that Iran is violating the nuclear agreement.8

U.S. and foreign intelligence agencies, the Department of State, the European Union, the International Atomic Energy Agency and the other five countries that participated in the certification of the nuclear deal are all in agreement that the deal is working.9 The Trump regime’s reported attempt to manufacture distrust and discord is a tired replay of the same script that got us into an endless war in Iraq – and we can’t let him do the same thing with Iran.

Tell congressional Democrats: Block and resist any attempt by the Trump administration to undermine the Iran nuclear peace deal. Click here to sign the petition.

While those trying to undermine the deal in Congress are doing their best to portray themselves as “serious” about national security and tough on nuclear weapons proliferation, their attempts to blow up the deal would in reality achieve exactly the opposite.

If war hawks in Congress and Democrats collaborating with Trump’s agenda succeed in sabotaging the Iran nuclear deal, the unprecedented constraints on Iran’s nuclear program would completely collapse – making Americans less safe and putting us on a path to war.

An undermined Iran nuclear deal would also cripple America’s standing as an international leader on nuclear non-proliferation and diplomacy, and it would unravel the coalition the Obama administration under then-Secretary of State John Kerry’s leadership had assembled to hold Iran accountable for its activities. The rest of the world would blame the United States for a failure to uphold the only diplomatic solution available to avoid war – and they would be right.10

That’s why we need to keep the pressure on Democrats in Congress to hold the line and not give in to any proposals that would sabotage or undermine this historic deal and would put us on a path to more wars and the increased spread of nuclear weapons.

Tell congressional Democrats: Block and resist any attempt by the Trump administration to undermine the Iran nuclear peace deal. Click the link below to sign the petition: