Use a one-click tool to tell Trump, McConnell, and Ryan you're not buying what they're selling on taxes. 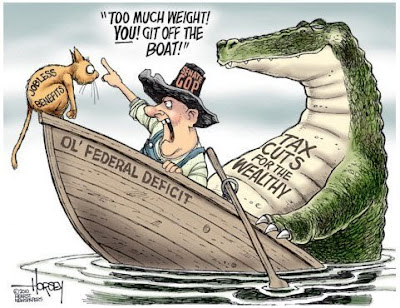 Republican leaders emerged from a 5-hour closed-door meeting where they finalized their tax "plan," and now Trump is selling it to the nation.
No matter what Trump says, here's the truth:
The only people the Republicans are trying to help are the rich and massive corporations -- despite new polls showing that 65% of Americans think corporate tax rates are too low and 62% oppose tax cuts for the rich.
We have to fight back -- use our one-click tool to tell Trump, McConnell, and Ryan you're not buying what they're selling on taxes.
Here's what to expect from Trump's speech describing the tax plan:
Trump and his Republican cronies are being so blatantly dishonest about the true implications of their plan because they know how unpopular it is.
But that won't stop them from doing everything they can -- including spending hundreds of millions of dollars -- to rush it through Congress with as little public input as possible. (Seriously: One corporate lobbying group has already pledged $100 million to help make sure it passes.)
That's why we need to make sure they hear our voices loud and clear.
Use the one-click tool to tell Republican leaders you're not falling for their lies about their tax plan
With funding for programs like Medicare and Medicaid on the line, we can't afford to lose this battle.
- The Tax March Team
Posted by Jana Segal at 1:36 PM

Email ThisBlogThis!Share to TwitterShare to FacebookShare to Pinterest
Labels: no tax cuts for the rich, Trump's tax plan