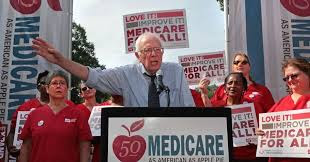 Health care should be a basic right for everyone in the United States. It's a national shame that so many Americans have to choose between lifesaving health care and going into debt or bankruptcy. Now that we've defended the Affordable Care Act from repeal, we need to improve on its limitations and make sure that no American is uninsured.

Pleases, support these senators by signing this petition:


The American people are ready for Medicare for All, and it is time for Congress to act. We must ensure that everyone has access to quality, affordable health care—and not at the mercy of private insurance companies that profit by denying care.

Sign the petition here
Posted by Jana Segal at 7:28 AM