Tell your Senators: Trump’s pick of an unqualified, anti-science talk show host with no credible science, policy, or agriculture background is unacceptable 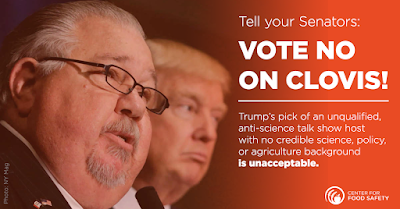 In yet another attack on science, President Trump has nominated Sam Clovis — a radio talk show host with no scientific or agricultural background and a history of making racist, sexist, and homophobic remarks — to be the chief scientist for the U.S. Department of Agriculture (USDA).
Clovis is an admitted climate change “skeptic”, saying that climate science is “junk science” and “not proven.” [1] Farmers need USDA to help them address and adapt to a changing climate, not stick its head in the sand. We all know agriculture has a big role to play in being a solution to climate change, but that won’t happen with Clovis at the helm of scientific research.
Tell your Senators to stop this attack on science: Vote NO on Clovis!
The position Clovis has been nominated for oversees a budget of nearly $3 billion and is responsible for agriculture and natural resource issues. The Farm Bill requires that the person in this position be a scientist, stating that the nominee "shall be appointed by the President . . . from among distinguished scientists with specialized training or significant experience in agricultural research, education, and economics.” [2] He's not an agricultural scientist, nor is he an agricultural economist. In short, he is simply not qualified for this position.
To make matters worse, Clovis has a history of making racist, sexist, and homophobic remarks. Clovis has made racist remarks about former President Obama, former Attorney General Eric Holder, former Labor Secretary Tom Perez, and Van Jones, among others; sexist remarks about House Minority leader Nancy Pelosi, Supreme Court Justice Ruth Bader Ginsburg, and all Democratic women; and compared protecting marriage equality and LGBTQ rights to protecting pedophilia [3][4].
USDA serves farmers of all races, genders, and sexual orientations. Tell your Senators: This racist, sexist, homophobic climate-denier has no place in the USDA.
- The Center for Food Safety team
------------------------------------------------------------------
1. http://www.cnn.com/2017/07/21/politics/clovis-nominated-to-usda/index.html
2. http://www.politico.com/story/2017/07/30/usda-sam-clovis-influence-trump-241114
3. http://www.cnn.com/2017/08/10/politics/kfile-sam-clovis-research/index.html
4. http://www.huffingtonpost.com/entry/trump-sam-clovis-pedophilia_us_599b339ae4b06a788a2ae997
Posted by Jana Segal at 8:29 AM

Email ThisBlogThis!Share to TwitterShare to FacebookShare to Pinterest
Labels: Sam Clovis nominee for chief scientist for Dept. of Agriculture