Stop Trump's revolving door. Sign the petition: Tell your senator to vote NO on Trump’s nominee for the DOJ Antitrust division. 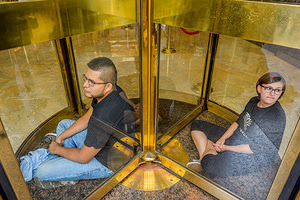 Trump may have campaigned on “draining the swamp” but his political appointments have been more of the same D.C. “revolving door.”

This time Trump’s pick for top lawyer for the Department of Justice’s Antitrust division, Makan Delrahim, is a corporate attorney turned lobbyist who’s made his career on advancing corporate mega-mergers.1

Sign the petition: Tell your senator to vote NO on Trump’s nominee for the DOJ Antitrust division.

Petition to the US Senate:

Trump’s pick to lead the DOJ’s Antitrust division is a career corporate merger lawyer who has lobbied in favor of corporate mergers that create de facto monopolies and squeeze consumers while fattening the pockets of corporate shareholders. Vote NO on Makan Delrahim’s nomination.

The DOJ’s Antitrust division is supposed to protect consumers like us from the monopolies created by mega-corporate mergers. Like the proposed AT&T Time Warner merger which would create a “too big too fail” media gatekeeper that could threaten consumer choice and the free flow of information on the internet.

Instead of looking out for consumers, Trump wants to install a lobbyist with decades of experience advocating for Wall Street mergers.

For instance, up until 2008, Delrahim represented telecom giant AT&T. As the top lawyer for the Department of Justice’s Antitrust division, he would now be responsible for overseeing a merger deal between AT&T (his former client) and Time Warner, a deal that would give one media company “control over the pipes and what flows through them.”2

Senator Elizabeth Warren called this “the latest edition of the fox guarding the henhouse.”3 And she’s exactly right. Mergers and monopolies are garnering more and more attention, especially from Democrats, for their role in furthering income inequality, driving down innovation, and setting up barriers for start ups to compete. That’s why the Democrat’s new platform, “A Better Deal,” explicitly calls for strong antitrust policies.

And if a corporate-friendly lawyer-turned-lobbyist turns into the head of the antitrust division, we’ll see even more mega-mergers like the AT&T Time Warner merger.

We need the DOJ to stand up and protect us from Wall Street’s abuses, not rubberstamp mergers so their old corporate buddies fatten their wallets while squeezing consumers.

Tell your senator: Vote NO on Delrahim nomination to lead the DOJ’s Antitrust division.