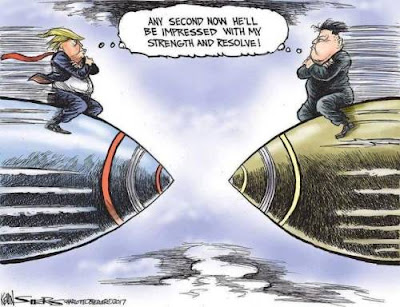 Fifty-five years ago during the Cuban Missile Crisis, Americans were glued to the news as fears of nuclear war escalated. Once again we're facing that fear as President Trump and the North Korean leader, Kim Jong Un, trade insults and engage in dangerous military actions and saber rattling that could spiral out of control. All of us need to do what we can to prevent that from happening.This is truly an all-hands-on-deck moment.

Call your members of Congress now and demand real leadership on North Korea and nuclear weapons.

Call the Capitol switchboard: (202) 224-3121. A switchboard operator will connect you directly with the House and Senate office you request.

Urge your members of Congress to speak out publicly and forcefully in support of a "diplomatic surge," as Senator Ben Cardin (D-MD), the ranking member of the Senate Foreign Relations Committee, has called for.


Talking Points to Guide Your Call:

I am deeply concerned about the crisis with North Korea and the prospects for a devastating war that could end up as a nuclear conflict.

It is critical that [LEGISLATOR] speak out public and forcefully for diplomacy.

Senator Ben Cardin has called for a global diplomatic surge. [LEGISLATOR] should show the same leadership and call for the United States to refrain from words and actions that make war more likely.
[LEGISLATOR] should speak out about why war must be avoided at all costs.

And [LEGISLATOR] should call for the administration to pursue direct talks with North Korea and also actively work with allies and all of the countries in the region, including China, North Korea, Japan, Russia, and South Korea to develop diplomatic solutions to this crisis.
Thank you for your time.

If you reach voicemail, feel free to leave a message. Please leave your full street address and zip code to ensure your call is tallied. Once you're done, feel free to call the switchboard again to contact your remaining members of Congress.

- Union of Concerned Scientists
Posted by Jana Segal at 3:42 PM