Sign if you agree: Hands off our public lands 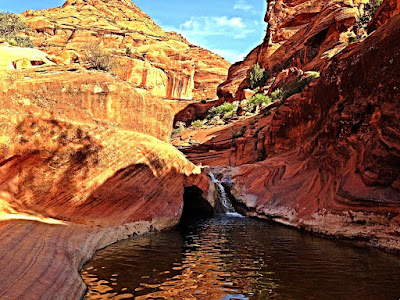 The petition to the U.S. House reads:
"Oppose H.R. 2423, which would threaten Utah's Red Cliffs Conservation Area, and any other legislation that would allow development, mining, drilling or fracking in conservation areas, national parks or other public lands."
Add your name:
The right-wing founder of the congressional anti-parks caucus, Utah Rep. Chris Stewart, has introduced dangerous legislation that would allow development of utilities and roads directly through the pristine Red Cliffs National Conservation Area, which would threaten the endangered Mojave Desert tortoise and literally pave the way for a future of unmitigated development and drilling in this protected region.Donald Trump's campaign to hand over national parks, monuments and other public lands to developers and the fossil fuel industry could get another boost very soon.
Rep. Stewart is moving quickly to pass this bill or quietly sneak it into a larger legislative package with little notice. We must act now to shine a light on this legislation and demand that Congress reject this attempt to seize federal land and threaten endangered species.
Tell Congress: Don't give away Utah's Red Cliffs Conservation Area. Click here to sign the petition.
A long-time climate denier and former CEO of an energy sector firm, Rep. Stewart has spent his political career working to hand over federal lands to the oil and gas industry.1 During his 2012 run for Congress, he was called "Glenn Beck on steroids" and received significant funding from the Koch brothers and ExxonMobil while campaigning on the promise to allow drilling for fossil fuels on public lands, claiming "de-federalizing public lands is vital to a coherent energy strategy."2,3,4
In Congress, Stewart has been staunchly anti-government and anti-public lands, supporting legislation to block the creation of national monuments and sponsoring bills that chip away control of federal lands — in order to give more access to the fossil fuel industry. In 2014, Stewart even seemed to sympathize with anti-government rancher Cliven Bundy after his extremist militia pointed loaded rifles at federal government employees.5
If Congress passes his bill, the endangered desert tortoise will be under major threat, but Rep. Stewart doesn't seem to care much for endangered species, either. Since he was first elected, Rep. Stewart has waged a vocal campaign against endangered species, praised the de-listing of the grey wolf, introduced legislation to prevent the listing of the sage grouse, and even sponsored a bill to that would undermine the Endangered Species Act altogether.6
It's abundantly clear that Rep. Stewart's legislation is another attempt to strip away federal control of public lands and hand it over to the fossil fuel industry for unfettered development. We can't let that happen.
Tell Congress: Don't give away Utah's Red Cliffs Conservation Area. Click the link below to sign the petition:
https://act.credoaction.com/sign/save_red_cliffs?t=7&akid=24999%2E3130208%2EC6rMIm
- Josh Nelson, Deputy Political Director
CREDO Action from Working Assets
Add your name:
References
Posted by Jana Segal at 10:28 AM