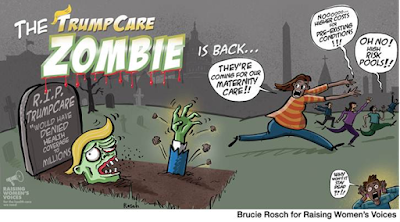 Like a zombie, Trumpcare is back. This time it's as a plan called "Graham-Cassidy"--named for Republicans who have bucked Trump in the past. So it's designed to look "moderate."
But we're not fooled. This version will completely eliminate Medicaid expansion, leaving 11 million of the most vulnerable people--including children--without insurance. It will gut protections for anyone with pre-existing conditions, send out-of-pocket costs soaring for people on the individual market, and "defund" Planned Parenthood. Those who keep their insurance "policy" aren't safe either--this bill allows the return of annual or lifetime caps on coverage and allows insurers to charge outrageous amounts for policies that don't cover basic needs, like maternity care and hospitalization. Over the course of the next decade, an estimated 32 million people will lose their insurance.1 No wonder President Trump is so eager to sign it.2
Due to Senate rules, this bill must pass by September 30--so Republicans are trying to fast-track quickly, hoping we won't mobilize in time. We can't let that happen. According to Sen. Cassidy (R-LA), they are only one or two votes away.3 Tying up the phone lines with our calls of outrage can give Republicans pause--and Sens. Collins (R-ME) and Murkowski (R-AK) have expressed deep concern, so we have a chance to win them over and then only need one more "no" vote. This is an all hands on deck moment--can you make a phone call to Senators John McCain and Jeff Flake?
Here are the numbers to call:
Will you make an urgent call to Sens. McCain and Flake now?
Speak in your own words, but here are some points to guide you:
Make a call today to protect the Affordable Care Act.
-- the UltraViolet Action team