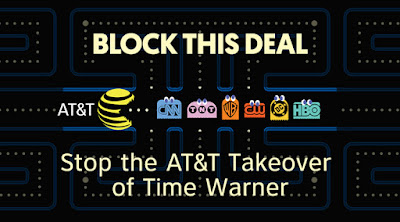 The petition to the Department of Justice reads:

"Stop the merger of AT&T and Time Warner, which would hurt consumers, decrease competition and drastically increase market concentration."

Media consolidation is already hurting our democracy and consumer choices. Now AT&T – one of the biggest telecommunications companies in the world – wants to buy Time Warner. This would be one of the biggest media mergers in history.

AT&T has a terrible track record of overcharging its customers,1 spying on them2 and opposing consumer protections like net neutrality.3 The new supersized AT&T could control both internet access and internet content for hundreds of millions of people.

Before that happens, the Department of Justice (DOJ) must approve or reject the $85 billion deal. The DOJ has been investigating for more than nine months, and if it rules against the merger, this dangerous deal won't happen.

These companies already have vast control over our media landscape. AT&T is the second-largest wireless and third-largest broadband company in the United States, and the company recently purchased DirecTV in another big merger. Time Warner is the owner of HBO, CNN, TBS and Warner Brothers. If this deal goes through, AT&T will control mobile and wired internet access, the largest satellite TV provider, cable and news channels, movie franchises, a major film studio, and much more.

Acquiring Time Warner's popular content would give AT&T the incentive and means to throttle speeds or limit availability for its competitors' content. Such behavior would be illegal under today's strong net neutrality rules. But with Trump's FCC now actively working to reverse them, AT&T could soon be able to prioritize its own content and make it even harder for other companies to compete.

Even worse, industry insiders say that if the merger is successful, other cable and satellite companies will seek similar deals with wireless companies and content firms.4 These larger mega-corporations would mean higher prices, lower wages, less competition and fewer jobs.

Just as important, less media diversity means a less-informed public and worse political outcomes. As fewer companies own more sources of news and information, these entities have greater and greater power to shape how we see the world. Consolidation in the media and telecommunications industries is not just harmful to our economy, it is simply bad for our democracy.

In the past, companies have won government approval of mergers by promising to meet special conditions that benefit the public. However, the companies have often failed to deliver on their promises to consumers and wiggled out of meager and unenforceable conditions – as in the case of the recent Comcast-NBCUniversal merger.5

The good news is that this deal is under widespread scrutiny. More than 20 state attorneys general are investigating the merger.6 Senate Democrats, led by Sen. Al Franken, have loudly opposed the deal.7 Even Donald Trump opposed it while on the campaign trail, although he has been conspicuously silent since taking office.

The AT&T-Time Warner mega-merger would stifle competition and limit our media options – and it would benefit no one except the executives and shareholders involved. The DOJ has antitrust rules in place specifically to prevent just this kind of danger. Those rules must be enforced.

Tell the Department of Justice: Stop the AT&T-Time Warner merger. Click the link below to sign the petition: