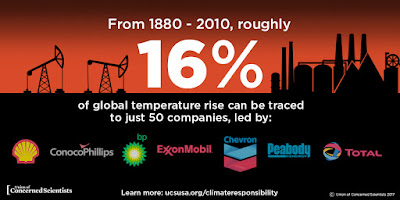 As Hurricane Harvey finally retreats from the Gulf Coast and Hurricane Irma threatens our coastline, communities are surveying the devastating damage done by these storms.

We know that human-caused climate change, including warmer temperatures and rising tides, can increase the power of storms like this and lead to more extreme weather and costlier impacts. And we know that global warming emissions from the fossil fuel industry have contributed to these changes in our climate.

After extreme weather events, communities face years of recovery and costly rebuilding. As the costs add up, it raises the question: Who should be held accountable for the costs being borne by communities across the United States? New UCS-led research sheds light on that question.

We've known for decades that ExxonMobil, Chevron, and other fossil fuel companies peddled doubt and deception to confuse the public and policymakers about the climate impacts of their products. Even when they understood the harm they would cause, some major fossil fuel companies used disinformation to fight sensible climate policies.

Now, groundbreaking research from the Union of Concerned Scientists quantifies the responsibilities of ExxonMobil, Chevron, and other leading fossil fuel companies in simple terms: degrees and inches. For the first time, this peer-reviewed study clearly shows the contribution of major fossil fuel companies to global temperature increase and sea level rise. These findings can inform discourse regarding share of responsibilities.

Share this new cutting-edge research on Twitter and Facebook, and keep the pressure on fossil fuel companies as we work to hold them accountable for their role in climate change.

Email ThisBlogThis!Share to TwitterShare to FacebookShare to Pinterest
Labels: Union of Concerned Scientists