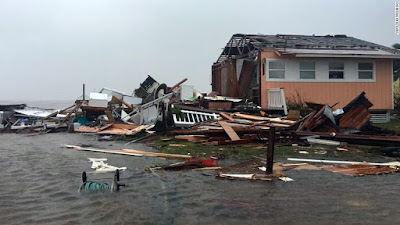 No crisis is too horrible for some right-wing Republican extremists to resist exploiting it in order to benefit Wall Street.
This time it’s far-right Texan Republican Jeb Hensarling, who is exploiting the devastation from Hurricane Harvey to push radical changes to the federal flood insurance program. Under Hensarling’s heartless plan, homeowners would pay higher premiums and face limited coverage – but private, Wall Street-backed insurers would get free rein.1
As Texas begins the long road to recovery now is not the time to gut federal flood insurance. We need to step up quickly and tell Congress to extend the program as-is – without changes that help Wall Street – and implement climate-smart reforms in the next long-term extension.
Tell Congress: Don’t exploit Harvey to gut flood insurance. Click here to sign the petition.
Harvey has broken the U.S. record for the most rain from any single storm. Hundreds of people have been rescued from rooftops, cars – even clinging to trees or street signs. Thousands more may still be trapped, and hundreds of thousands of people across southeast Texas will be living with the devastation for months.2
But Hensarling sees all this as an opportunity to push his long-term plans to gut the federal flood insurance program. Created in 1968, the program fills in for the failure of private companies to provide affordable, quality, widely available flood insurance. Hensarling wants to make huge changes that could leave homeowners facing higher premiums and less coverage while easing restrictions on private insurance companies. It’s a classic example of privatizing a public good.3
Largely due to Hurricanes Katrina and Sandy, the program has paid out a lot more than it has taken in. But the program’s aim has always been protection, not profit. Reforms to the program should make it better prepared to face the new realities of climate change, like new flood risk maps and policies that reflect the latest climate science while protecting low-income homeowners and helping communities prepare. Congress has to reauthorize funding this September in order to keep it going, so we have to act fast.
Tell Congress: Don’t exploit Harvey to gut flood insurance. Click here to sign the petition.
Storms happen. Storms this severe happen more often because conservatives have blocked all efforts to slow climate change. And the effects are more tragic and unjustly felt because of conservatives sabotaging public infrastructure and defunding of emergency response and a decades-long campaign to abandon certain neighborhoods and steal health care and a safety net from millions of working people.
Congress can enact smart reforms to the federal flood insurance program to better equip the United States to deal with climate change. Rushing through a Wall Street-friendly package under a deadline in the middle of a disaster is the exact wrong way to make changes. We need to tell Congress to reauthorize flood insurance as-is to provide help to the people suffering now – and then start working on climate-smart reforms to the program in any long-term reauthorization.
Tell Congress: Don’t exploit Harvey to gut flood insurance. Click the link below to sign the petition:
https://act.credoaction.com/sign/harvey?t=8&akid=24875%2E3130208%2EYH7_o-
Murshed Zaheed
CREDO Action from Working Assets

Petition to Congress reads:
"Do not use the destruction from Harvey to push through Rep. Hensarling’s plan to undermine federal flood insurance. Pass a clean, short-term extension now while working on science-backed, climate-smart reforms for inclusion in the next long-term extension."

Photo: Thomas B. Shea/Getty Images
Posted by Jana Segal at 8:34 AM