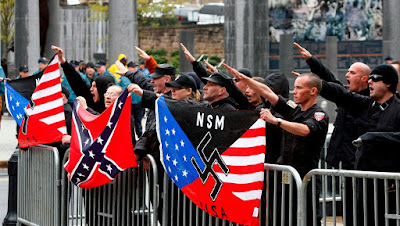 “The president has the authority to make this pardon, but doing so at this time undermines his claim for the respect of rule of law.”12

However, their words are meaningless if they continue to enable Trump’s white supremacist policies, practices and appointments. By pushing through Trump’s judicial nominees, they are helping to ensure that a bigot’s legacy lives for generations. We have to do everything we can to highlight the stakes of their choice and force them to stop handing the courts to a white supremacist.
We must hold Democrats accountable too. Even though they do not have the numbers to block Trump’s nominees, keeping Trump from being able to fill even a portion of the total vacancies could limit the damage he inflicts on our courts. Senior members of the Judiciary Committee like Sens. Feinstein, Leahy and Klobuchar must commit to total resistance, denounce Republican efforts to speed up the process and do everything in their power to block the confirmation process. Instead they seem to want to maintain the decorum of the Senate and give Trump a chance.
Recently, Sen. Feinstein – the ranking Democrat on the Senate Judiciary Committee – offered an appalling and delusional endorsement of the white supremacists’ lawless commander in chief when she stated that he “can be a good president.”13 This is beyond unacceptable. With the courts at stake, Democrats must act like an opposition party that represents the majority of the American electorate and fight back with a firewall of resistance against Trump’s right-wing takeover of the federal courts. Can you add your name today?
Tell the Senate Judiciary Committee: No lifetime judicial appointments for a white supremacist in chief with no respect for the Constitution or the rule of law. Click the link below to sign the petition:
https://act.credoaction.com/sign/trump_judges?t=8&akid=24882%2E3130208%2E6fEOZD
- Heidi Hess
CREDO Action from Working Assets
Add your name:
Posted by Jana Segal at 5:28 PM