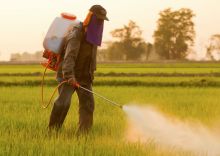 Trump wants Michael Dourson, best friend to the chemical industry, to lead the EPA’s toxics program.  But Dourson has shown he can’t be trusted: he’s worked with the industry to downplay the dangers of substances from secondhand smoke, to Teflon to petroleum coke — some of the very chemicals he'd oversee in his new role.

We can’t let that happen. Add your name and tell your members of Congress to block Michael Dourson’s nomination!

As your constituent, I urge you to oppose Michael Dourson’s nomination to lead EPA’s Office of Pollution Prevention and Toxics. Dourson is a horrifying choice for an office that’s supposed to protect people and the environment from unsafe chemicals . He has a long history of working for the tobacco and chemical industries to promote hazardous substances including secondhand smoke, Teflon, petroleum coke, and more – including the chemicals he would oversee in this role. A person who has shown such friendliness to the chemical industry has no business at the EPA, an agency designed to protect the people, not polluters. For the sake of our environment and our health, please vote against Michael Dourson’s confirmation.

More information on who is at the EPA.
Posted by Jana Segal at 11:22 AM