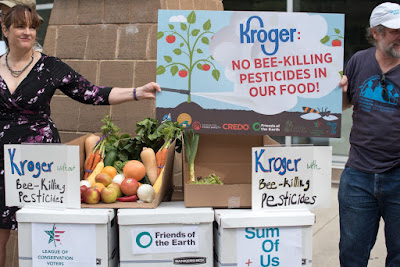 We will not stop until the world's biggest grocery store chain finally does what it takes to save the bees.
This summer, we delivered more than 400,000 signatures to the Kroger shareholder meeting, demanding that the grocery giant stop selling bee-killing neonicotinoid pesticides in its stores.Our shareholder resolution, that would have brought more accountability to the CEO and likely enabled more sustainable, bee-friendly policies by the super-chain, earned a whopping 36% of support from shareholders.
We are very close to bringing Kroger over to the right side of history. Walmart, Home Depot, Lowes, and True Value have all already agreed to stop selling neonics after we took these corporations to task.  Now it's just a matter of time until Kroger falls in line.
This is why we are joining forces with Friends of the Earth to spread the message to as many Kroger stores as we can.
Join us and take the fight to Kroger. Get all the tools you need to stop Kroger from selling bee-killing pesticides.
So far, Kroger and Kroger-owned grocery stores have refused to ban bee-killing neonic pesticides, even though mounting evidence shows that these deadly chemicals are decimating bee, butterfly and other pollinator populations. But as the last of their competitors realize that consumers actually want bee-friendly policies, it’s only a matter of time before Kroger realizes that saving the bees is in its own best interests.
65 per cent of Americans have said they’re more likely to shop at a grocery store that has promised to eliminate bee-killing neonics. And with the huge strides we’ve made at the AGM, it’s only a matter of time before Kroger’s own shareholders demand changes from within. This isn’t a fight we can win. It’s a fight we are winning.
Get our step-by-step guide on how to save the bees. We’re tooling up to get Kroger to stop selling bee-killing neonics.
We have already taken huge steps toward saving the bees in the US. In May, Walmart and True Value Hardware announced that they are prepared to stop selling bee-killing neonics all thanks to pressure from SumOfUs and Friends of the Earth members like you. And just last month, 140,000 people asked the EPA to ban four of the most widely used chemicals - and we’re prepared to keep up the fight as long as it takes.