TAKE ACTION: Tell Pruitt: Now is not the time to go back on clean water protections! Don't repeal the Clean Water Rule! 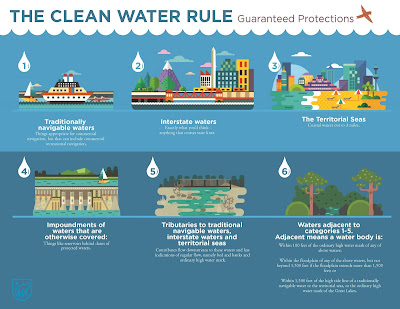 Thanks to EPA Administrator Scott Pruitt, the rule that protects the drinking water for 117 million people in the United States is under attack.

Administrator Pruitt has issued a proposal to repeal the Clean Water Rule, moving this country away from a commonsense safeguard that helps state and federal agencies protect our rivers, streams and wetlands under the Clean Water Act.

Despite the fact that a majority of people in this country consistently support stronger clean water protections, the Trump administration continues to bend to the will of oil and gas industries and Big Agriculture by repealing this important safeguard. This move weakens clean water protections across the nation, attacking our public health, the growing outdoor economy, and the fish and wildlife that depend on clean water to survive.

Let Pruitt know: Now is not the time to go back on clean water protections!

Unfortunately, this attack is just one piece of the larger effort to go after vital safeguards for clean water across the country. We need your help to elevate this issue. The EPA is looking for your input, so now is your chance to submit a comment telling the agency that you do not support repealing the Clean Water Rule!

Without the Clean Water Rule, waters across the country—and the people, wildlife and businesses that rely on them—are at risk.

We’ve come so far in the almost 45 years since the Clean Water Act was first passed, yet many of our rivers, lakes and bays are still not safe for swimming, drinking or fishing. Tell Administrator Pruitt that now is not the time to go even further backwards on water protections.

Dear Representative,
I am writing in response to your recent request for comments on the repeal of the Clean Water Rule. As someone who supports protections for this nation's waters, I strongly oppose this attack.

Before finalizing the Clean Water Rule in 2015, EPA held more than 400 meetings with stakeholders across the country, received over 1 million comments--more than 80 percent of which were in support of the rule--and published a synthesis of more than 1,200 peer-reviewed scientific publications, which showed that the small streams and wetlands the rule safeguards are vital to larger, downstream waters.

Repealing the Clean Water Rule would put many of our waters at risk, including waters that are critical for drinking water supplies, recreation, fish and wildlife. It would also affect our economy. Consumers spend $887 billion annually in outdoor recreation and the outdoor recreation economy is responsible for 7.6 million American jobs. Without protections for wetlands and small streams, the outdoor industry will likely suffer. The costs of treating our water also go up when streams and wetlands aren't protected.

Clean water is fundamental to our health and economy, something our nation recognized a long time ago in passing the Clean Water Act. I urge you to reconsider this proposal and leave the Clean Water Rule in place.
Posted by Jana Segal at 2:17 PM