Tell the Senate: No Wall Street lawyer as Fed watchdog 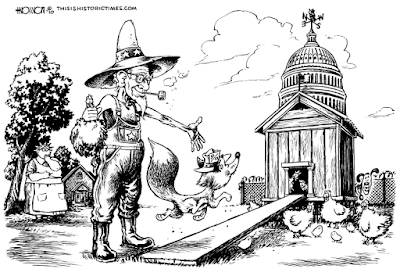 Petition to the U.S. Senate:

"Oppose the nomination of Randal Quarles, a Wall Street lawyer who helped create too-big-to-fail banks, and any Federal Reserve nominee like Quarles who opposes common-sense rules protecting Americans from financial wrongdoing and the Federal Reserve’s responsibility to create full employment."

Randal Quarles has spent 30 years spinning in the revolving door between Washington and Wall Street. He helped create too-big-to-fail banks and personally profited from the bailouts, but now wants to slash banking rules.2,3 No wonder Sen. Elizabeth Warren calls Quarles “a dangerous choice” to be Federal Reserve vice chairman of supervision.4The Wall Street stooge in the White House has struck again by trying to fill the position of top watchdog overseeing big banks at the Federal Reserve with a lifelong Wall Street lawyer.1

A shocking number of Democrats sided with Senate Banking Committee Republicans to approve Quarles, including corporate Democrats like Sens. Mark Warner and Heidi Heitkamp but also Sen. Chris Van Hollen. We badly need to ratchet up the pressure before a full Senate vote to make it clear that Quarles is an unacceptable choice to be the Fed banking watchdog.

Sen. Warren said that Quarles is “straight off the Wall Street assembly line.”5 In the Quarles’ nomination hearing, she didn’t hold back:6

"You’ve got 15 years representing big banks at a New York law firm working on some of the mergers that created the too-big-to-fail banks that we have today… You have two stints at the Treasury Department, including shortly before the 2008 crisis where you insisted the banks were well capitalized enough to survive a housing downturn… and more than a decade in private equity and investment management where you’ve argued repeatedly for weaker rules for the biggest banks… That’s not a track record that should give Americans a whole lot of confidence in you."


On top of it all, our friends at the Fed Up coalition note that Quarles wants the Federal Reserve to set interest rates according to a technical rule that ignores the reality of the tough job market, instead of focusing on the Fed’s mandate to achieve full employment. A Federal Reserve Bank of Minneapolis study says that this rule would have cost as many as 2.5 million jobs.7

In short, Quarles helped banks get bigger while consistently opposing tough rules to rein them in – and wants interest-rate policy to help Wall Street instead of working Americans.

At one point, Quarles worked in private equity, and his firm’s investments in troubled banks earned hundreds of millions of dollars. If not for government bailouts, those profits in Quarles’ pockets would never have happened.8 He’s exactly the wrong choice to be in the incredibly powerful position of vice chair of supervision, overseeing all of the Federal Reserve’s regulation of big banks.

Federal Reserve Chair Janet Yellen’s term is also set to expire soon, and no one knows whom Trump might nominate or whom the senate would approve. Our opposition to Quarles will make it clear that people like this – who pad their bank accounts making banks bigger while putting the rest of us in danger – have no place in important Federal Reserve positions. A full Senate vote on Quarles’ confirmation could come any day now, so we need to speak out immediately.

Tell the Senate: No Wall Street lawyer as Fed watchdog. Click the link below to sign the petition: