Denounce Arpaiso's pardon: It could diminish the judicial authority enshrined in the Constitution 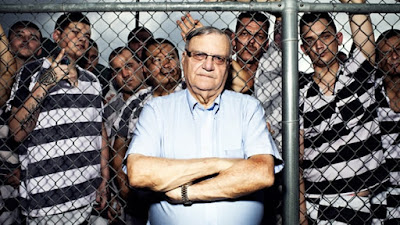 Just because Trump pardoned former Sheriff Joe Arpaio, doesn’t mean he’s in the free and clear just yet. In fact, Trump may have opened a legal can of worms that, if unchallenged, could take away the judicial authority enshrined in our Constitution.1

The nitty gritty details are pretty wonky but here’s the basic gist: the president’s pardon powers are not limitless,2 and they can’t be used to upend the Constitution or the separation of powers.

That’s what makes Arpaio’s pardon so different. He was accused, and found guilty, of not following explicit orders from the federal court (criminal contempt of court) – specifically to stop racial profiling and to stop violating the human rights of undocumented people.

By pardoning Arpaio, Trump wants to lay the precedent of neutralizing the power of the federal courts to compel public officials to follow the law – an authority granted to the courts in our Constitution.

Just after Trump announced the pardon, Arpaio’s lawyers asked U.S. District Judge Susan Bolton to vacate Arpaio’s criminal convictions. Instead she’s holding off on a decision until after a hearing on October 4th.3

That means Arpaio isn’t out of the woods just yet. And we need to make it crystal clear that abusing the presidency’s power of the pardon to protect a racist sheriff is NOT acceptable.