Tell the Bureau of Land Management to protect our public lands and keep this coal in the ground! 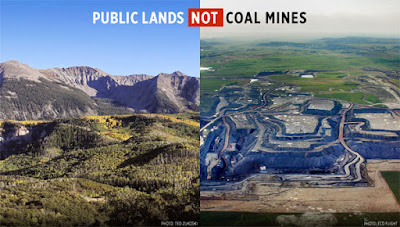 In the age of Trump’s anti-climate administration, it's easy to feel discouraged about the future of our country's climate policies. But time and time again we've seen that continuing to fight together, across all legal means, is our best chance for protecting our future and our climate.

Despite the Trump Administration’s plans to help fossil fuel giants, we are still winning. In the last month, the Sierra Club has won three landmark court cases regarding the government’s obligation to take into account the climate impacts of fossil fuel projects.1, 2 These rulings are good news for climate advocates and for those that care about our public lands. We are continuing to push back against the Trump Administration’s fossil fuel agenda, and we want your help.

Right now, the Bureau of Land Management is considering another massive, 441 million ton coal mine expansion on public lands in Wyoming. For context, this is more than 50 times as much coal as Colstrip, one of the largest coal-fired power plants in the United States, burns in a year. Building on the success of our recent court battles, we want to drive home to the BLM that the public is watching, and that caring for our public lands requires taking into account all the costs of continuing to burn fossil fuels.

Email the Bureau of Land Management today, and tell them not to sell our climate future for short-term coal profits.

Last year, in response to public pressure, President Obama paused all leasing of coal on public lands while the Bureau of Land Management reassessed its public coal-leasing program. Thanks to hundreds of thousands of public comments, the BLM determined that it needed to update its coal-leasing program to take into account the cost of coal's damage to our health and our climate. Now, President Trump's administration is trying to disregard the will of the public, which supports investment in new clean energy technology over a dying coal industry, and we're determined to fight back.

The lands and the coal at stake in the Antelope 3 mining project in Wyoming are owned by taxpayers. This is our chance to hammer home the need for the BLM to be honest with the American people about the climate, health and economic impacts of letting the fossil fuel industry wreak havoc on our public lands.

Our goal is to drive thousands of comments into the official record, to show the BLM that people throughout this country demand policies that support and protect the long-term health of our communities and our climate.

Submit a message to the Bureau of Land Management during its scoping process today. Let the agency know its environmental analysis must include the cost of doing further damage to our climate. Let's build on these legal victories, and show our growing grassroots power.