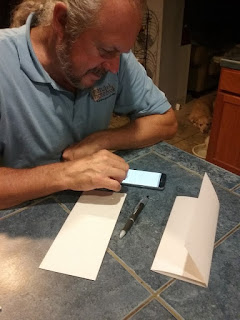 I am becoming more and more concerned with the militarization of our police forces. I watched horrified as police in N. Dakota shot tear gas and water cannons at the peaceful Water Protectors who bravely stood up against the Dakota Access Pipeline. Isn't it against the law to use chemical warfare on civilians? Aren't police supposed to protect citizens, not greedy oil corporations? Some vets were so outraged that they headed to Standing Rock to make a human shield to defend the Water Protectors.

After several peaceful marches in Tucson, some activists and concerned citizens went to protest when President Trump held a campaign-style rally in Phoenix. Some, expecting a peaceful demonstration, brought their children. The next day, I watched a video of  Phoenix police, in full riot gear, shooting tear gas and rubber bullets into a relatively small crowd of chanting protesters after the Trump rally ended. This was definitely overreach by the police. Just because you have military surplus weapons at your disposal doesn't mean you should use them - especially on the people you are sworn to protect.

Now our president has reversed the restrictions on military hardware for police. My fear is that if the police have the weapons they will feel compelled to use them - like they did at the Phoenix protest. So Dan and I decided to write the Phoenix and Tucson Chiefs of Police and ask them not to accept any more military surplus.

Do we want a police state?

Here are our letters that we mailed this morning:

I am writing regarding the Phoenix Police Department’s response to the anti-Trump protestors after the rally on August 22, 2017. I have several friends who drove to Phoenix to protest. Some were human rights activists, some were just good citizens. There were even some parents with children. Yes, children. Because they expected a peaceful protest like we had in Tucson. I am concerned about how the police handled the situation after the rally. This video shows what appears to be a serious overreaction by the police. https://www.facebook.com/RealNewsAz/videos/1987765628123220/

It appears that the officers on the line were being provocative with their full riot gear on and then they charged through the barriers and started firing tear gas at a small number of peaceful protestors who were doing nothing more than chanting slogans. Since when is it acceptable to use chemical weapons on civilians? Isn’t that illegal even in wartime? Is it your objective to promote martial law? Even if some of the protestors were yelling at the police that is no reason to escalate the situation. Your officers need training on how to deal with angry protestors and separate any anarchists from the crowd so things don’t escalate to a point where the destruction of property occurs. Actually listening to the citizens or talking it out can go a long way. But there is no chance for listening when cops shield themselves with helmets, face shields, gas masks, and ear plugs.

Why were peaceful protestors met with a line of police in riot gear in the first place? Can’t you see that the presence of heavily armed police could promote fear and anger that might incite a riot? Militarizing the police is not the way to deal with citizens expressing their right to free speech. It is the duty of the police to protect the people. In this time of civil unrest, it is more important than ever that the police build trust with the people they serve, not treat them like criminals or the enemy. In Tucson, we had a peaceful march and the police were there to protect us from angry haters. The police officers stood on the sides and we thanked them as we walked by. Police will be able to serve better, if they build trust by getting to know people – not through fear and intimidation. Building good relationships will encourage people to work with the police and report crimes in their neighborhoods, making our communities safer for everyone.

Now Trump has reversed the restrictions on military hardware for police. Please, don’t militarize our police. It will only encourage more violence and vandalism on the streets. The police are there to protect us, not to incite peaceful protestors into war.

I wanted to thank you and the Tucson Police Department for your professionalism and restraint. I have participated in a number of protest rallies since the election of President Trump. The crowds were large and, in some cases, angry; but it felt as though your officers were there to protect us from harm. They quietly kept the crowd under control, managed traffic, and were courteous and professional.

What a contrast to what we witnessed in Phoenix! There, the officers appeared to provoke a small group of noisy but peaceful protestors by showing up in full riot gear, forming a skirmish line, and aggressively advancing on the protestors, who were still behind the barricades the police had erected to keep them away from the Convention Center. When the protestors raised their voices in protest, they started firing tear gas. That is no way to deal with citizens. Again, the contrast with the professionalism of TPD is like night and day.

I recently saw news reports that President Trump has authorized the sale of additional military arms to police departments, including grenade launchers and bayonets. When, exactly, would a police force ever need to use either one of those?!!! I presume we can count on you to maintain your professionalism and not purchase any of these weapons, even if they are being offered to you by the Federal Government.

Thank you for your service protecting the citizens of Tucson.

Here are their addresses if you would like to write your own letter.