Healthcare? The GOP is back with another We Don't Care bill 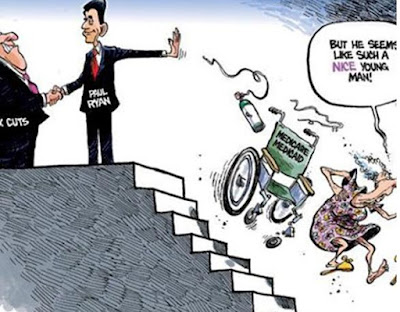 The clock is running out on the GOP's attempts to overturn the Affordable Care Act, so of course they have another proposal in the queue to try to "save healthcare," Republican style.

Graham, Cassidy, Heller, and Johnson (sounds like a law firm, doesn't it?) have a grand new plan to shift control of healthcare to the states. Sounds great, right? After all, we've been told innumerable times that the states know best. And this plan promises a lot of the old Republican standards: Health Savings Accounts, rollbacks of employer mandates, and block grants.

As usual, this plan will hurt those who can least afford it: the working poor and the middle class will see their insurance coverage diminish, their premiums go up, and more money out of pocket for deductibles. Small businesses will also see less support for providing health coverage for their employees. And, if you're old or have a pre-existing condition, watch out: the bill doesn't remove the mandate to cover people with pre-existing conditions, but it does allow states to apply for waivers to the law that would allow insurers to charge exorbitant premiums to cover those patients. Also, it dismantles rules prohibiting insurance companies from selling worthless junk policies.

But, there are some who would benefit: medical device manufacturers will see a tax cut, large employers will no longer be required to provide coverage to their employees, and the states that refused to expand medicare coverage to spite President Obama will get a bonus for their loyalty to party, paid for by the states who tried to put their citizens ahead of politics.

Yep. This is exactly the kind of healthcare plan we can expect from today's Republican Party.  One of GOP's rallying calls is that this plan is the last chance to stop Bernie's Medicare for All act.

I personally believe that America should catch up with the rest of the civilized world and provide healthcare for all of us.  But even if you don't want your tax dollars to pay for other people's coverage, look at it this way - you will save money on your healthcare under Bernie's plan. The increase in taxes is MUCH less than the cost of coverage (not even factoring in the cost of the huge deductibles.)

With the GOP's plan block grants will diminish over time forcing states to charge more taxes if they want to keep or expand medicare. The states would have a choice on how they use that money, but only 20% is allowed for medicare. One problem with each state having separate healthcare plans is that we would lose our collective bargaining power so the cost of premiums would go up.

So if our healthcare ends up in the hands of the states, the big question is, "Will my state representatives take care of me and my family?"
Posted by Jana Segal at 10:48 AM