Sign the petition if you agree: The Senate needs to stand up for consumers and fire FCC Chairman Ajit Pai. 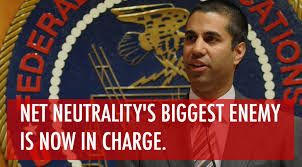 Petition to US Senate:


Since joining the FCC, Ajit Pai has undercut the public interest at every turn. From waging war on the free and open internet and Title II net neutrality, to threatening to cut off phone and internet service to low-income people, it's clear he's more interested in looking out for his former employers at Big Cable than the American People. Pai is failing at his job to protect consumers and should not be re-confirmed. Please vote NO to reconfirming Ajit Pai to the FCC.

He’s been undermining the open internet from his first day at the Federal Communications Commission, and he’s only gotten worse since Trump made him Chair.

Pai is going all out to repeal net neutrality protections – even after a record 20 million public comments overwhelmingly told him to leave the open internet alone.

But we have good news: The Senate has an opportunity to stop Ajit Pai’s anti-net neutrality, pro-Big Cable agenda in its tracks.

The Senate has to vote to reconfirm Pai to the FCC by the end of the year or he’s out.

Here’s what this means for us: We can get every single member of the Senate on the record about net neutrality and a whole lot more.

Let’s be clear: A vote for Pai is a vote to:
End the internet as we know it, and let Pai's former employers at Verizon and the rest of Big Cable be the gatekeepers of what you can and can’t do online.
Let notorious right-wing media empire Sinclair (known for its racist and highly biased “must-run” broadcasts1) get market share reaching over 70% of American households.2
Shut off phone and internet service for the working poor and low-income people.

Not one senator should support that agenda.

Sign the petition if you agree: The Senate needs to stand up for consumers and fire FCC Chairman Ajit Pai.

Pai has made it clear he has no real interest in public service to begin with – only furthering the interests of his Big Cable benefactors. Let’s end his career at the FCC.