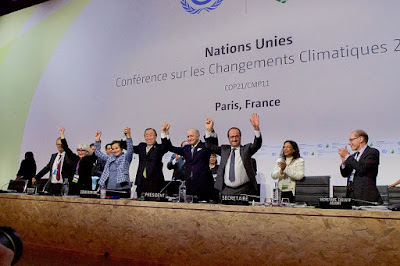 News reports from Washington say that Donald Trump is leaning towards pulling the United States out of the Paris Climate Agreement, the backbone of international climate action. He's meeting with top advisers to decide next Tuesday.

Pulling out of Paris is immoral, economically foolish and puts the interests of fossil fuel billionaires ahead of vulnerable people everywhere. But it’s not the end of the road for climate action -- if we keep speaking out.

In this moment, it’s crucial that we, the people, demonstrate that political momentum for climate action is unstoppable -- so that every world leader, CEO and local government official keeps their priorities straight and fights for our future, not the profits of the coal, oil and gas industry.

Our best tool is showing that millions of people continue to stand for climate progress. We’re joining a global alliance of organizations to send that message to the world (and Trump) next week. Can you stand with us? Click here to show your support for the Paris Agreement and climate action.

Climate denial is the product of greed, and there is no administration greedier than Trump's, which is led by fossil fuel executives and their political puppets.

The biggest danger is that other governments and corporations follow him into the abyss. Decades of full-scale mobilization by people everywhere put the Paris Agreement into place, and we can defend its steps forward by speaking out with one voice, and organizing to make it even stronger - by marching in the streets, demanding divestment, and so much more.

Last weekend over 200,000 people in Washington, D.C. and many around the world marched for jobs, justice and climate action -- the exact opposite of Trump’s plan to back out of Paris. This week, a Global Divestment Mobilisation is challenging prominent institutions on every continent to pull their support from the fossil fuel industry.

We will keep going. Tell Trump, and the world, that you are a part of the unstoppable momentum for climate action -- and help keep us on the road forward to 100% renewable energy that works for all.

The path to climate justice was never going to run smooth, but we are still on course for the action we need. Thank you for being a part of it.
Posted by Jana Segal at 1:58 PM