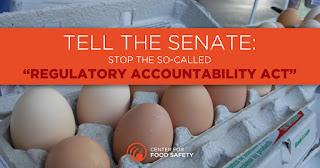 The Regulatory Accountability Act1 (S. 951) has already passed the House and the Senate Committee on Homeland Security and Governmental Affairs will take up the bill TOMORROW!

The RAA is a dangerous bill that would effectively prevent the passage of food safety and other regulations that protect the public health by intentionally creating a roadblock of time-consuming, unnecessary, and unprecedented obstacles to the agency rulemaking process.

Tell your Senators to oppose the RAA and protect public health

Many vital laws to protect the environment and public health would not have been enacted had the RAA been in place, such as the Food Safety Modernization Act (FSMA), passed in 2011. FSMA gave the Food and Drug Administration (FDA) substantially improved oversight and provided FDA with new enforcement, inspection and recall powers to address foodborne pathogens. Foodborne illness is an epidemic in our country: According to the Centers for Disease Control, every year 47.8 million people (one in six Americans) are sickened as a result of foodborne illness.

If the RAA passes, agencies like the FDA entrusted with protecting the American public’s health will be hamstrung. Tell the Senate to reject this dangerous bill.

This bill is designed to make it as difficult as possible for federal agencies to implement existing or new laws that protect clean air and water, ensure a safe food supply, require food labeling, regulate pesticides, address climate change, and even protect children from toxic toys. Instead of protecting public health and welfare, the RAA fast-tracks the repeal of rules while paralyzing the creation of new ones.

- The Center for Food Safety team
Posted by Jana Segal at 9:08 AM