They did it. They actually voted to initiate the repeal of net neutrality. 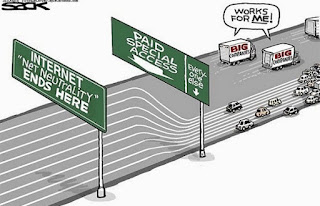 They did it. They actually voted to initiate the repeal of net neutrality.

On a party-line vote, the FCC voted for the first step of Chairman Ajit Pai's plan to hand control of the internet to giant telecom corporations.

Comcast and Verizon may have won this battle, but they have not won the war.

Today's vote was just the first step in the FCC's rule-making process. We have until July 17 to put as much pressure as possible not only on the FCC, but also on Congress and the White House, to keep net neutrality rules in place.

The reason we can stop this plan is because gutting net neutrality is massively unpopular. So many people have made online comments against this plan that the FCC's website crashed.

We need to make sure that Republicans in the House, Senate, and White House all understand that if the FCC goes forward with handing over control of the internet to Comcast and their big telecom brethren, they will be held accountable.

Here's what we're doing to get the message across loud and clear:

We have 60 days to keep net neutrality front and center in the political spotlight.