Scott Pruitt, the head of Donald Trump’s Environmental Protection Agency, fired half of the scientists yesterday 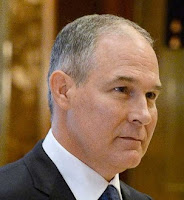 We can’t let deniers like Trump and Pruitt attempt to erase or gloss over the facts without calling them out.

Today, Ivanka Trump is meeting with Scott Pruitt to decide whether or not to drop out of the landmark Paris climate agreement. The move comes just three days after the Department of Energy removed mentions of the Paris agreement from their website on climate change.Yesterday’s purge is just a continuation of the Trump administration’s effort to sideline climate scientists in the interest of boosting profits for their friends in the fossil fuel industry. In fact, the EPA says they might even fill out the empty spaces on the scientific review board with employees currently on the payroll of Big Oil and other polluters.

Now, after Trump issued an executive order calling for rollbacks of current environmental protections, Pruitt's EPA is asking for public input on which regulations to cut.

Pruitt wants to hear from us? Let's give him an earful.

This administration's reckless anti-regulatory agenda seems to know no bounds. And if it succeeds in rolling back our core environmental safeguards, the damage to people's health would be enormous. We can't let that happen.

The EPA is already hearing from Big Business about which regulations they'd like to see disappear, so it's vital that the rest of us have a say.

And while Trump administration officials appear to have no real interest in our opinions or wellbeing, they'll take notice when we throw enough sand in the gears. Over 40,000 people have already submitted comments on this disgraceful proposal.² Let's give them 40,000 more.

Regardless of what Trump and his cronies want, the EPA is supposed to protect human health and the environment, NOT the financial interests of corporations. We need an EPA that is empowered to do its job — fully funded and run by people who believe in its mission. We need current regulations to be fully enforced and new regulations enacted to address emerging concerns.