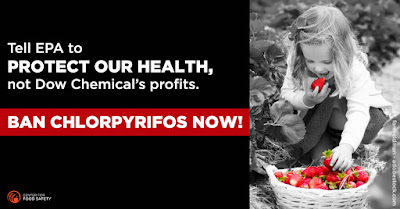 Last Friday, cabbage harvest on a farm outside of Bakersfield, California was halted when farmworkers fell ill due to pesticide drift from a neighboring mandarin orange grove.1 The pesticide used in the orchard was one that the Environmental Protection Agency (EPA) has actually proposed banning: chlorpyrifos.

Unfortunately, President Trump's EPA reneged on the proposed ban, even though chlorpyrifos is known to harm kids’ development2, and chose instead to protect the profits of Dow Chemical, the maker of the pesticide.We now have until June 5th to convince the EPA to ban this dangerous pesticide and protect our kids.

Chlorpyrifos is from a family of chemicals – organophosphates – that were used as neurotoxins by Nazi Germany3 in World War II. Thus, it’s no surprise that chlorpyrifos damages brains. Chlorpyrifos is reported to cause severe neurotoxic symptoms in humans if touched, inhaled, or eaten. And as with many hazardous chemicals, fetuses and kids are especially susceptible.

Long-term studies sponsored by the EPA and NIH have established that when pregnant women are exposed to chlorpyrifos and other organophosphate insecticides, resulting in fetal exposure, their children grow up to have lower IQ scores,4 increased rates of attention deficit hyperactivity disorder (ADHD),5 and poorer mental development6 than unexposed children. Fetal exposure to chlorpyrifos has also been associated with reduced birth weight and length, reduced gestation time and autism spectrum disorder.

Citing risks to children, in 2000, the EPA banned most uses of chlorpyrifos in homes, schools, day care facilities, parks, hospitals, nursing homes, and malls, but they allowed farms to continue spraying it. While farmers, farmworkers, and children in farming communities get the biggest doses of chlorpyrifos, most people are exposed to chlorpyrifos through consuming contaminated food.

After more than 10 years of review, the EPA concluded in October 2015 that exposure to chlorpyrifos posed an unacceptable risk and proposed a new rule that would effectively ban agricultural use. But Dow Chemical and the pesticide industry pushed the EPA to backtrack on the chlorpyrifos ban, and it appears to have paid off: Dow Chemical contributed $1 million to the president's inaugural committee;7 Mike McKenna, a Dow lobbyist, was one of the first to serve on Trump’s transition team; and Trump even named Dow Chemical Chairman and CEO Andrew Liveris chair of the American Manufacturing Council.8

It’s disappointing, but not surprising, that the Trump EPA refused to ban chlorpyrifos. Trump's pick to lead the EPA, former Oklahoma Attorney General Scott Pruitt, has been openly hostile toward environmental regulation, and sued the EPA thirteen times while serving as Oklahoma’s Attorney General. At his confirmation hearings, Pruitt couldn't name a single EPA regulation he supports.9

The Center for Food Safety team