Tell Congress to pass the COAST Anti-Drilling Act to protect our coastlines from offshore drilling! 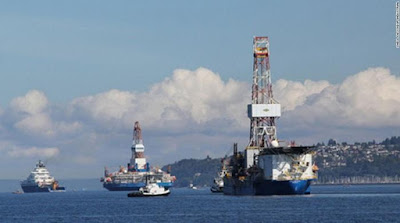 Donald Trump recently issued an executive order to open our coastlines to offshore oil and gas drilling, displaying a blatant disregard for the health and safety of coastal communities.

This reckless move jeopardizes our beaches, our incredible wildlife (including endangered species), and our fishing and tourism economies that depend on a healthy ocean — all to line the pockets of Big Oil and Gas.

Tell Congress to pass the COAST Anti-Drilling Act to protect our coastlines from offshore drilling!

Trump's executive order would lift a ban on offshore drilling in the Atlantic and Arctic oceans and potentially open up marine sanctuaries in the Pacific and Atlantic for drilling as well.1

That's why we need to pass the COAST Anti-Drilling Act. It would prevent the Department of the Interior from issuing oil and gas leases in Atlantic coastal areas. (Additional legislation would be required to address the other impacted marine areas in the Arctic and Pacific.)

Oil leaks and spills are not just a risk — we know that when drilling is allowed, they happen. According to the Department of Interior, there were about 60 oil spills per year between 1964 and 2012, resulting in millions of gallons of oil going into our oceans, causing serious harm to wildlife like endangered sea turtles, whales and other marine life.2

And remember the 2010 BP Deepwater Horizon disaster in the Gulf of Mexico? It devastated the region's tourism, fishing and seafood economies and impacted beaches from Louisiana to Florida. Even now, seven years later, wildlife and communities are still feeling the impacts.

And even before drilling begins, seismic testing causes huge impacts on marine wildlife.3 To determine just how much oil and gas exists under the ocean floor, compressed air is blasted from a vessel to the ocean floor every 10 seconds, 24 hours a day for days or weeks at a time. This causes wildlife to flee, disrupts feeding and mating habits, and can cause permanent hearing loss, injury and even death to some of the most beautiful and majestic wildlife in the world.

Don't let the oil and gas industry jeopardize the ocean we all love.

Decades of action by people like you and me has kept offshore drilling off the Atlantic coast and out of most of our federal waters. Today, I ask you to continue the fight to keep our oceans, wildlife and communities safe.

Please take action with Food & Water Action Fund to urge your members of Congress to stand up for our coasts and ban offshore drilling.