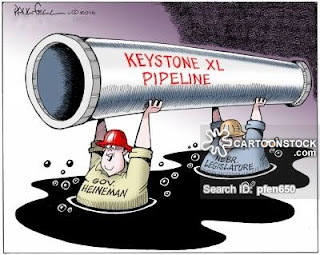 Trump may be desperately trying to revive the Keystone XL tar sands pipeline, but he's far from the final word on this disastrous project. The Keystone XL still needs approval to route the pipeline through the state of Nebraska — and that's up to state officials.

We need your help to prevail on the Nebraska Public Service Commission to deny permission to route the pipeline through Nebraska.

Without an approved route through Nebraska, TransCanada, the company behind the pipeline, can't start construction — which means Nebraska has the power to potentially put an end to the Keystone XL once and for all.

NRDC is fighting the pipeline on every front. We've sued the Trump administration for its illegal resurrection of the pipeline. And we're working to persuade investors that Keystone XL is a bad bet, economically and environmentally, and that they should walk away from this project.

Your quick action is the most important thing you can do to help us stop Trump and his fossil fuel allies from brazenly moving forward with the Keystone XL.

If built, the pipeline would cross hundreds of Nebraskan rivers and streams, cut within a mile of countless wells and threaten the Ogallala Aquifer, which provides drinking water for more than a million people. What's more, it's a virtual certainty that the pipeline will leak — exposing farms, ranches, families and wildlife to highly volatile, toxic chemicals.

And beyond its potential to devastate America's heartland, the Keystone XL would be responsible for annual greenhouse gas emissions equal to 37.7 million cars, driving climate change and keeping us shackled to the climate-wrecking fossil fuels of the past.

We've stopped Keystone XL before — because people like you rose up together and took action.